For DC comic book fans, there is good news and bad news. First the negatives, and then the positive reasons why Aquaman may still make a dent in the box office, even if it isn’t perfect. 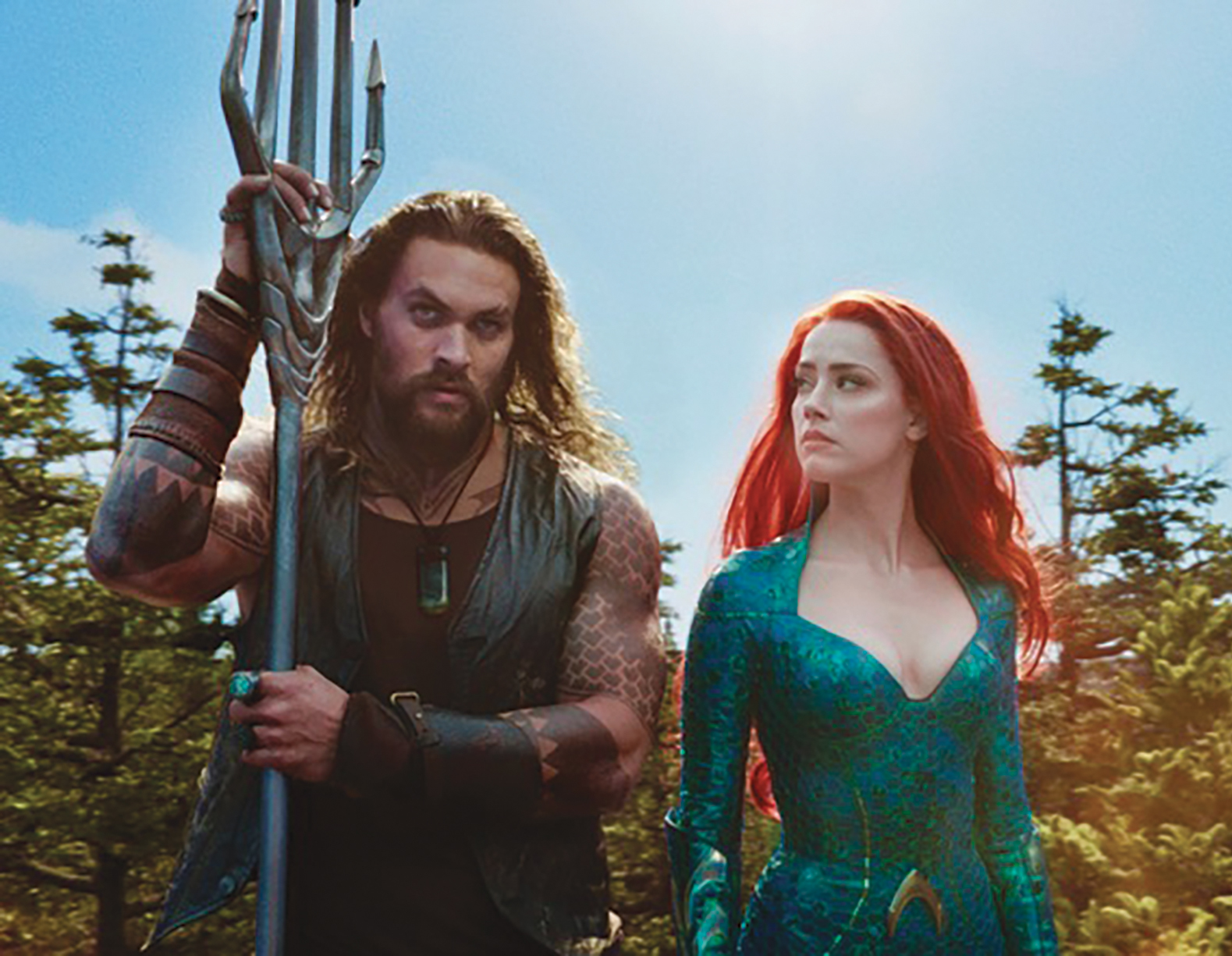 For DC comic book fans, there is good news and bad news. First the negatives, and then the positive reasons why Aquaman may still make a dent in the box office, even if it isn’t perfect.

What’s lacking: The special effects (visual effects supervisor Kelvin McIlwain) aren’t exceptional. Visions of Arthur/Aquaman (Jason Momoa, Game of Thrones, Conan the Barbarian) and his ally/love interest Mera (Amber Heard, North Country), a warrior/princess, swimming through waters frantically from emergency to emergency are cheesy looking CGI. Demons from the ocean and sea monsters look run-of-the-mill. There’s nothing new, nothing to shout about, nothing that defies imagination.

The technique that director James Wan (The Conjuring, Saw and Furious 7) and his production team use to make the characters look like they are floating in water, is odd and sometimes annoying. Their hair floats like they are below the sea, but they don’t look wet. Interior scenes of submarines, homes, etc. look like backlot sets. And not to be petty, but whoever decided that Mera’s cranberry red hair should look like a cheap wig bought at a Halloween store, didn’t do the actress any favors.

What’s just OK: Rupert Gregson-Williams’ (Wonder Woman) dense musical score fills up some empty space. Clocking in at 2H 23M, the footage doesn’t test patience, which affirms the editor’s (Kirk M. Morri, The Conjuring, Furious 7) taste in pacing. The array of colors by art directors Bill Booth (Thor: Ragnarok) and Desma Murphy (Terminator Salvation) is easy on the eye. However, viewers may wish the entire tech team had decided to make this an art/adventure film, something as visually captivating as Yimou Zhang’s Hero or Ridley Scott’s Prometheus. The underwater location could have been a hotbed of stunning visuals, but that potential is never fully realized.

David Leslie Johnson-McGoldrick (Wrath of the Titans) and Will Beall (Gangster Squad) have created a script that conjures the origin story for the latest version of Aquaman. (Note: The original dates back to 1941; the modern incarnation started in 2011). They set up characters who have rivalries and bad blood that goes way back in time:

Years ago, the underwater Queen of Atlantis, Atlanna (Nicole Kidman), fled her kingdom and her body washed up on a rocky Maine shoreline. A lighthouse keeper named Tom (Temuera Morrison, Once Were Warriors) brought her and her trident weapon back to his home. They fell in love and eventually had a hybrid child, with both land and sea traits. At some point, Atlanna got captured and taken back to her home. Tom raised their son, who grew up to be a fine, but rebellious young man, Arthur (Momoa).

As an adult, Arthur/Aquaman became a crime fighter with incredible powers: super strength, impenetrable skin, an ability to swim faster than a missile and able to communicate with marine life. He misses his mom and hates the kingdom of Atlantis for taking her away. A sea dweller named Mera comes to warn him of an impending invasion from the underwater world that will bring the wrath of the seven seas to people on earth. As heir to the throne, the crimefighter must decide if he is willing to save the world.

What’s cool: The flip side of Arthur’s life is the netherworld of Atlantis, where his half-brother Orm (Patrick Wilson, Fargo, Angels in America) reigns. The mean nasty Aryan-looking sibling is eager to point out, “I am the pure blood.”  Words like mongrel and half-breed are hurled at Arthur. The premise for the war is that earth is polluting waters, poisoning children and deserves carnage. These contemporary themes give the film a very topical, 21st century agenda.

Adding entertaining characters, who are decently or well-played by an eclectic cast, helps too: Willem Dafoe plays Vulko, council to the Atlantean throne; Yahya Abdul-Mateen (The Greatest Showman) storms through scenes as a vengeful pirate, while Michael Beach (If Beale Street Could Talk) plays his dad; and Dolph Lundgren (Creed II, Rocky IV) portrays the rival King Nereus.

Heard, Kidman, Morrison and Abdul-Mateen are consistently interesting to watch and elevate their scenes. However, the actor of the hour is Jason Momoa. His version of Aquaman is that of a complete badass superhero who displays the right balance of self-doubt and flat out bravura. At 6’4”, with a lion-like mane and beard, he is fun to watch. Humor and joy permeate his performance. Yet when he is on the attack you know he can slay demons. Momoa has established himself as a movie star who can take top billing on a film and keep moviegoers in their seats. If they ever recast Jack Reacher, he’d be perfect.

As Arthur’s mission to save the world comes to a head, the costumes the superhero wears, from tattoos and jeans, to T-shirts and black leather vests build to a crescendo with a stunning gold, bumpy warriors shirt and black gloves and boots with fins. That vision, with lights and water cascading over him and a superpower trident in his fist, radiates star quality. This kind of astonishing imagery should have been the crux of the film, but it isn’t.

Is there anything hugely wrong with Aquaman? Not really. Is this a missed opportunity? Yes. The Hawaiian lead actor makes this project unique. Casting him gave this superhero motion picture a chance to stand out from the pack. Movie goers are looking for action films that are off the beaten path. If Wonder Woman and Black Panther can knock it out of the park, there is absolutely no reason why this film wasn’t genius and innovative from beginning to end.

On the name alone, Aquaman should pull hordes of viewers into the theater. The question is, “Will they come back again and again and make this film a megahit even if it’s imperfect?