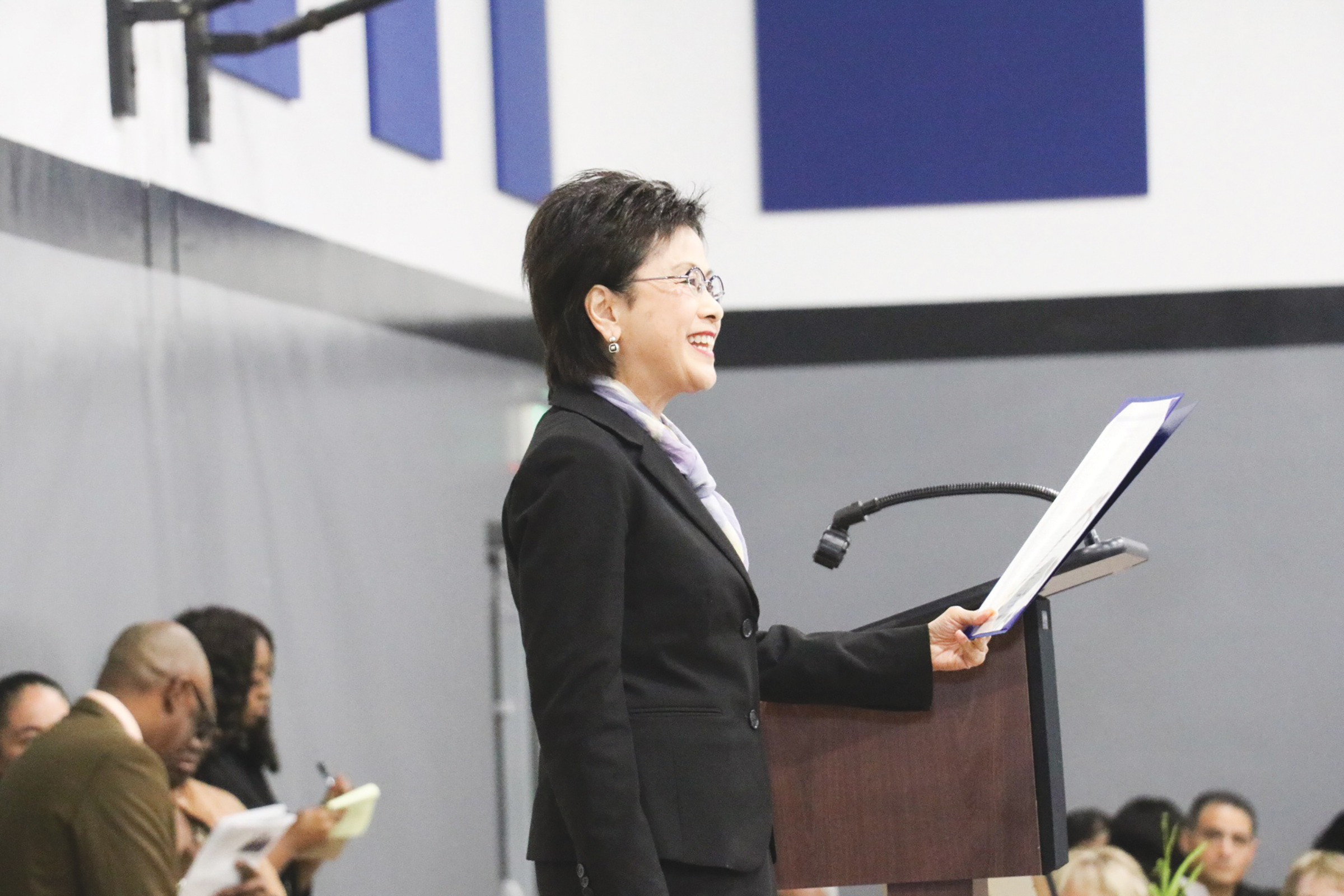 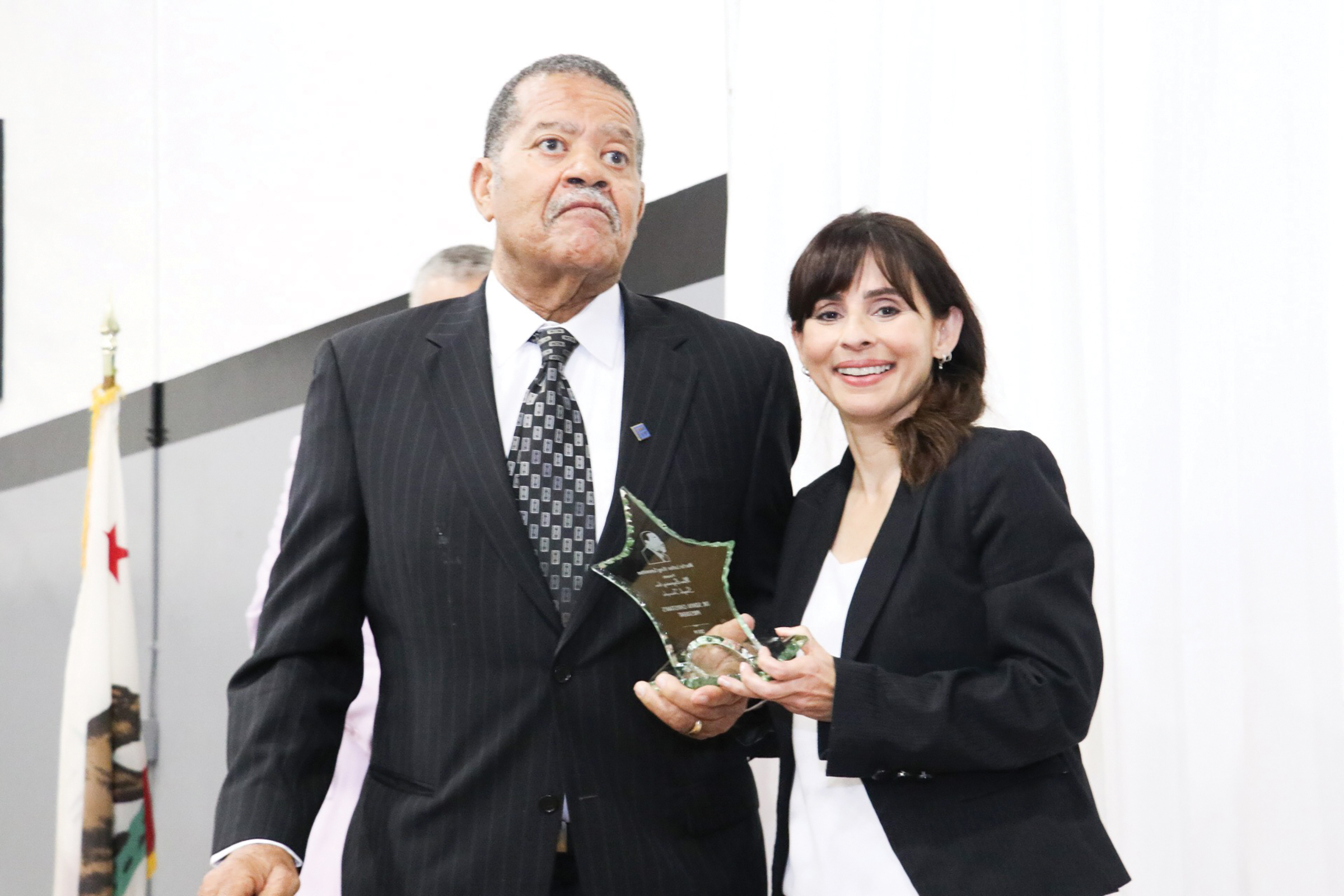 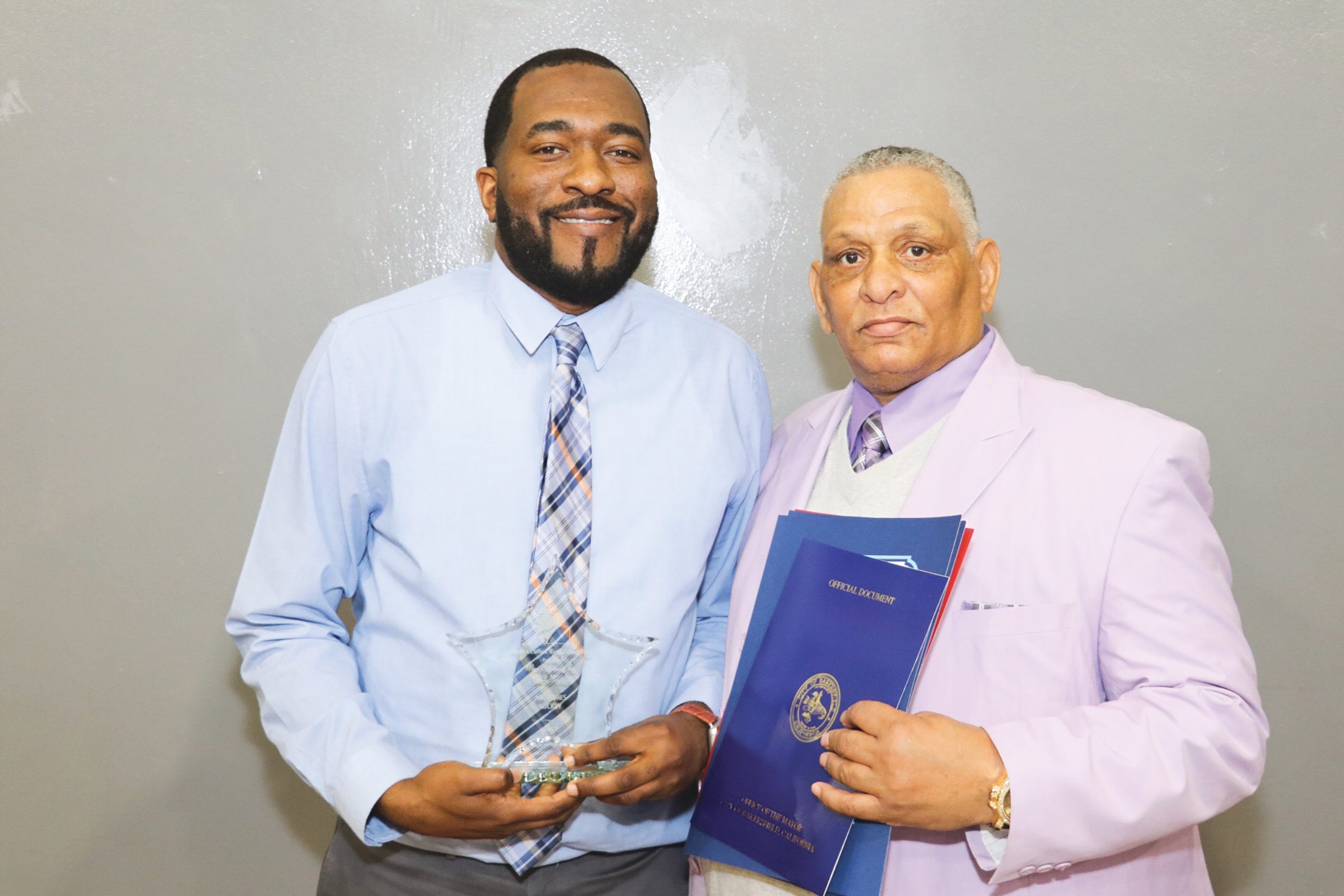 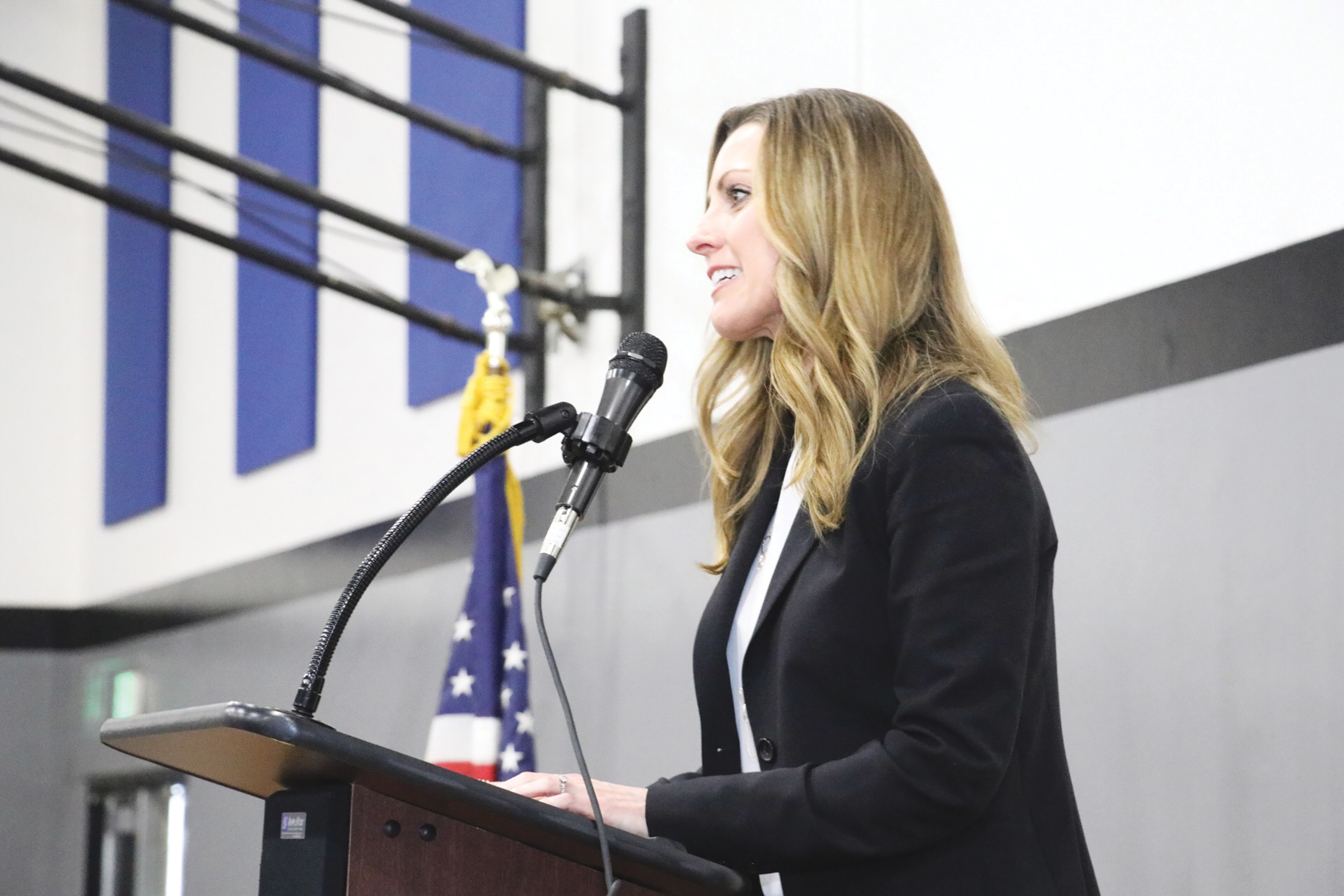 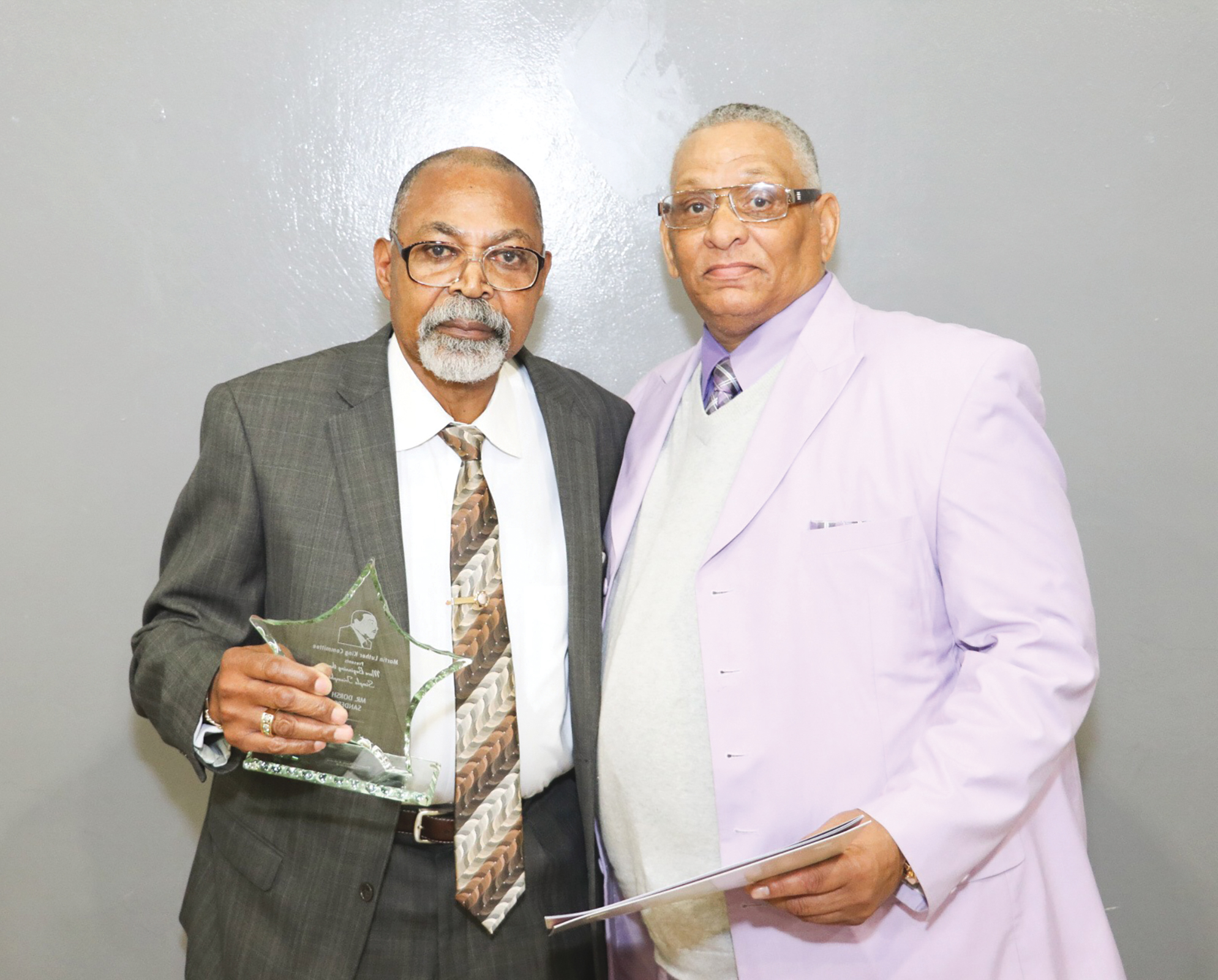 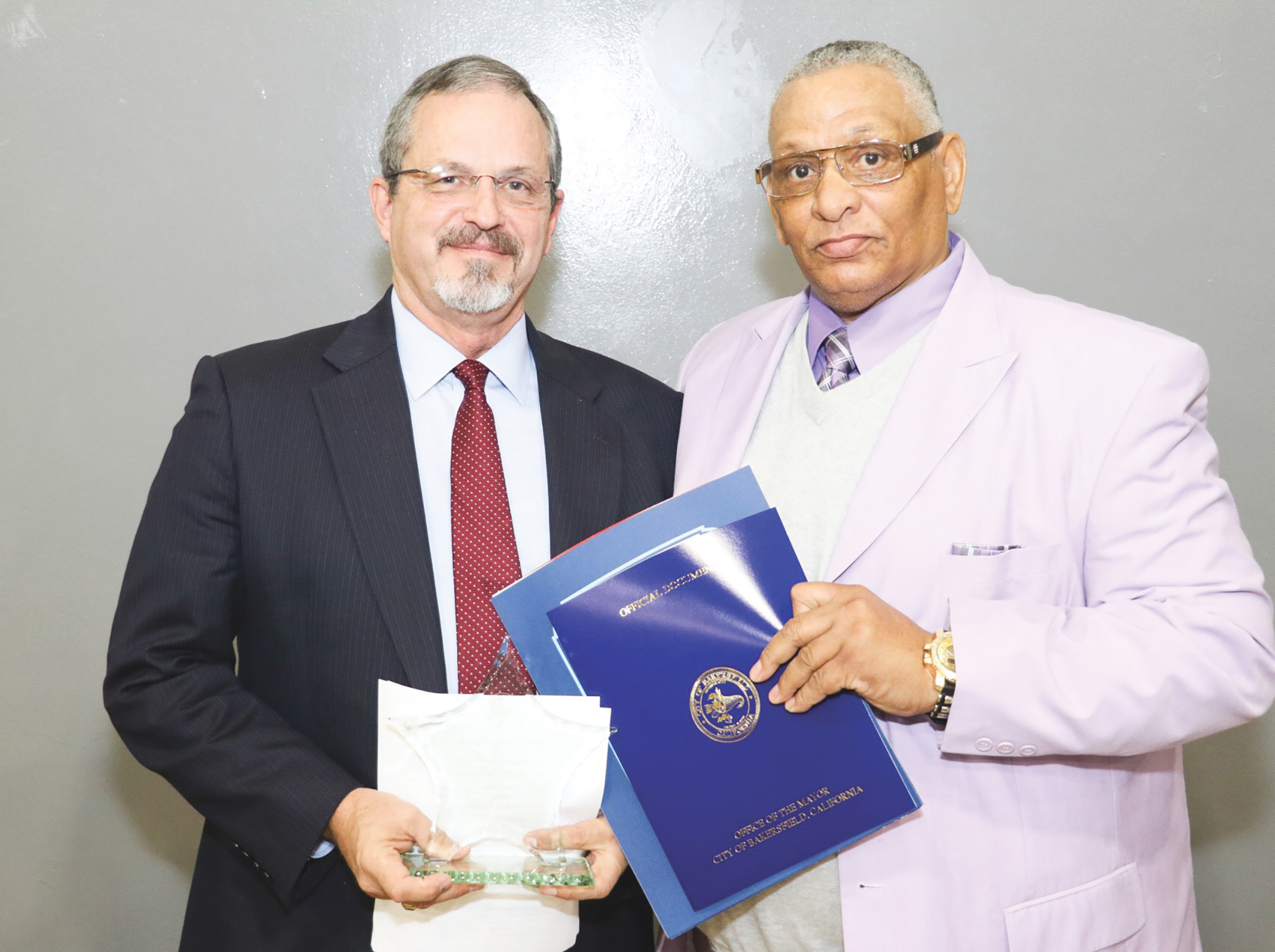 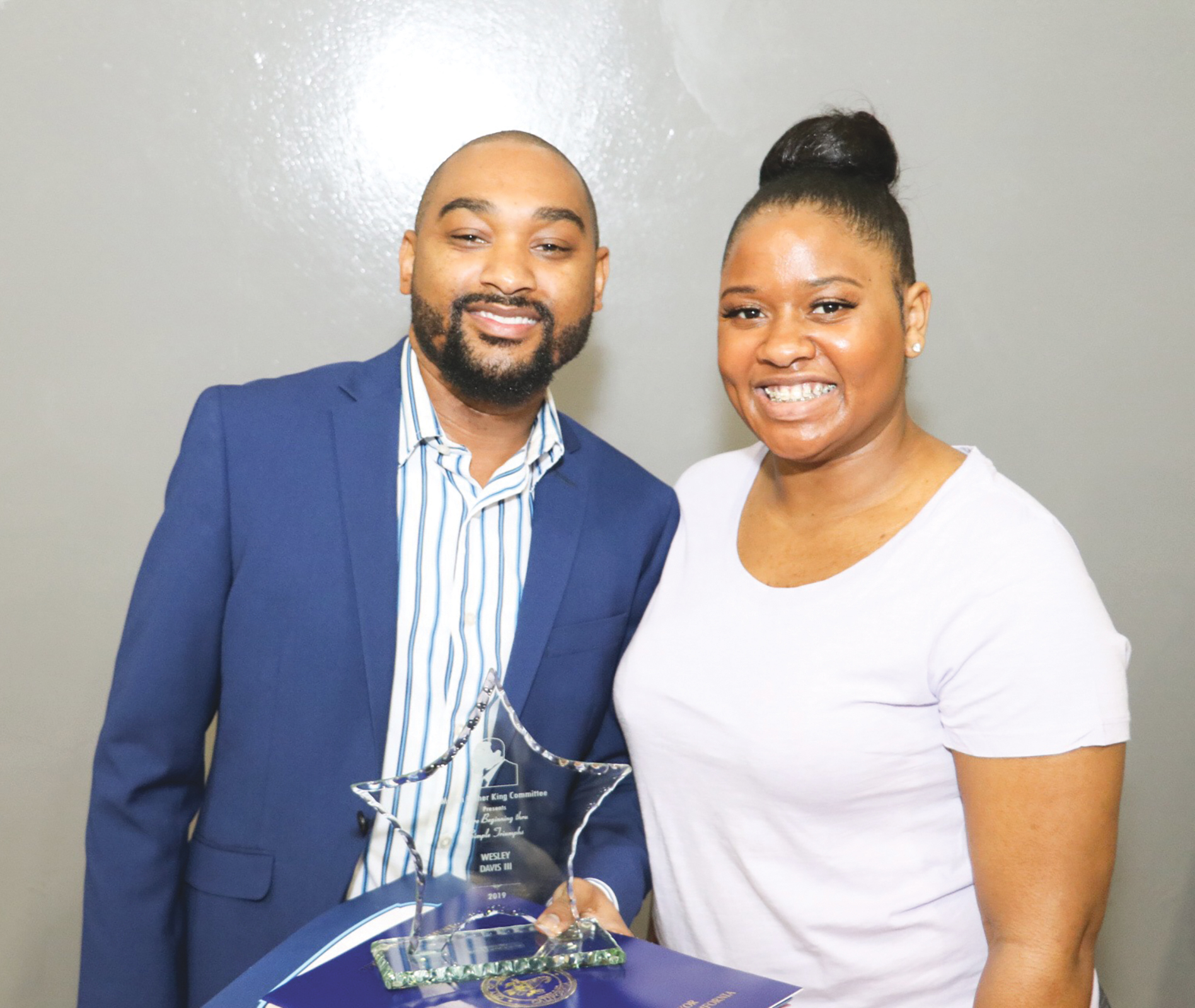 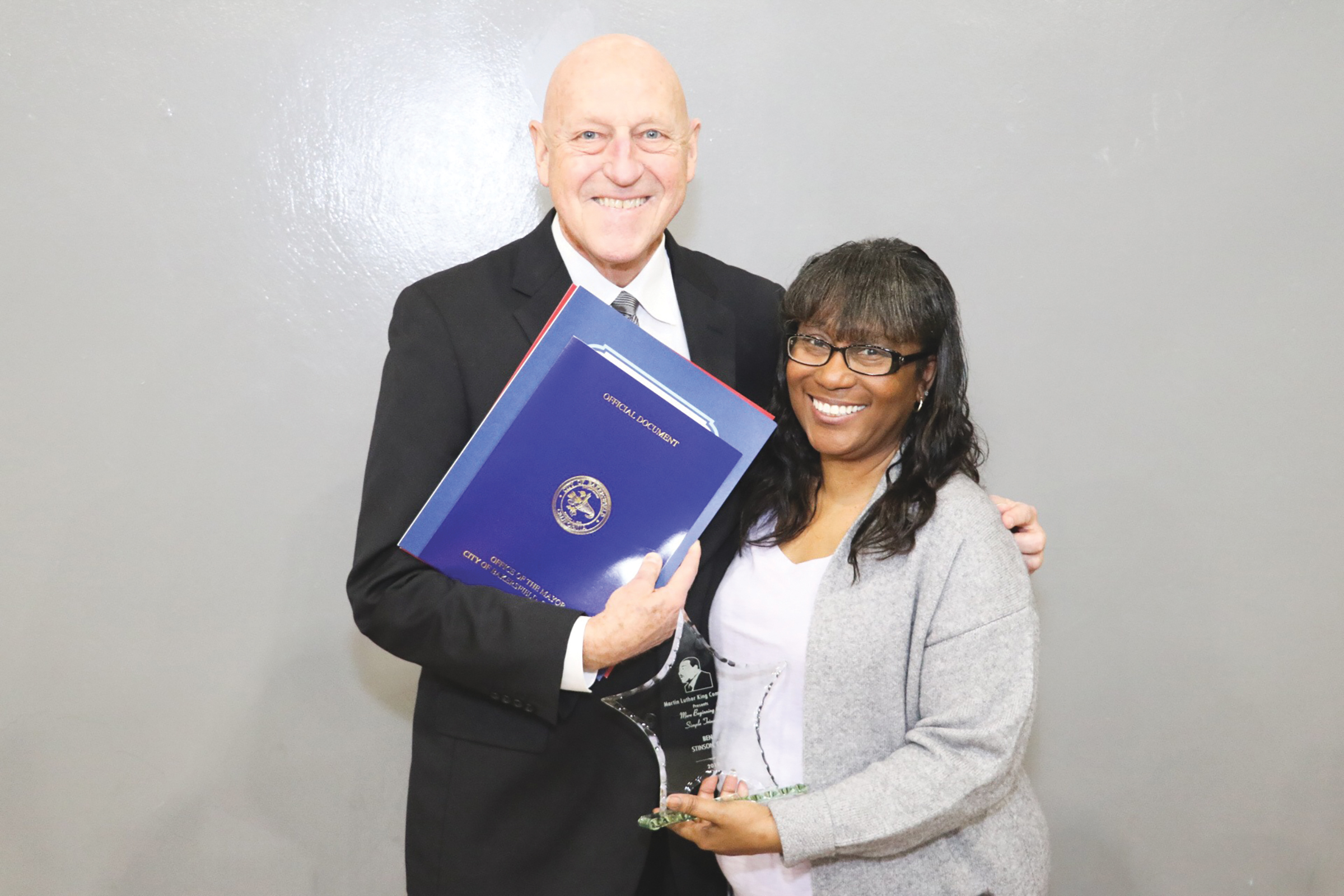 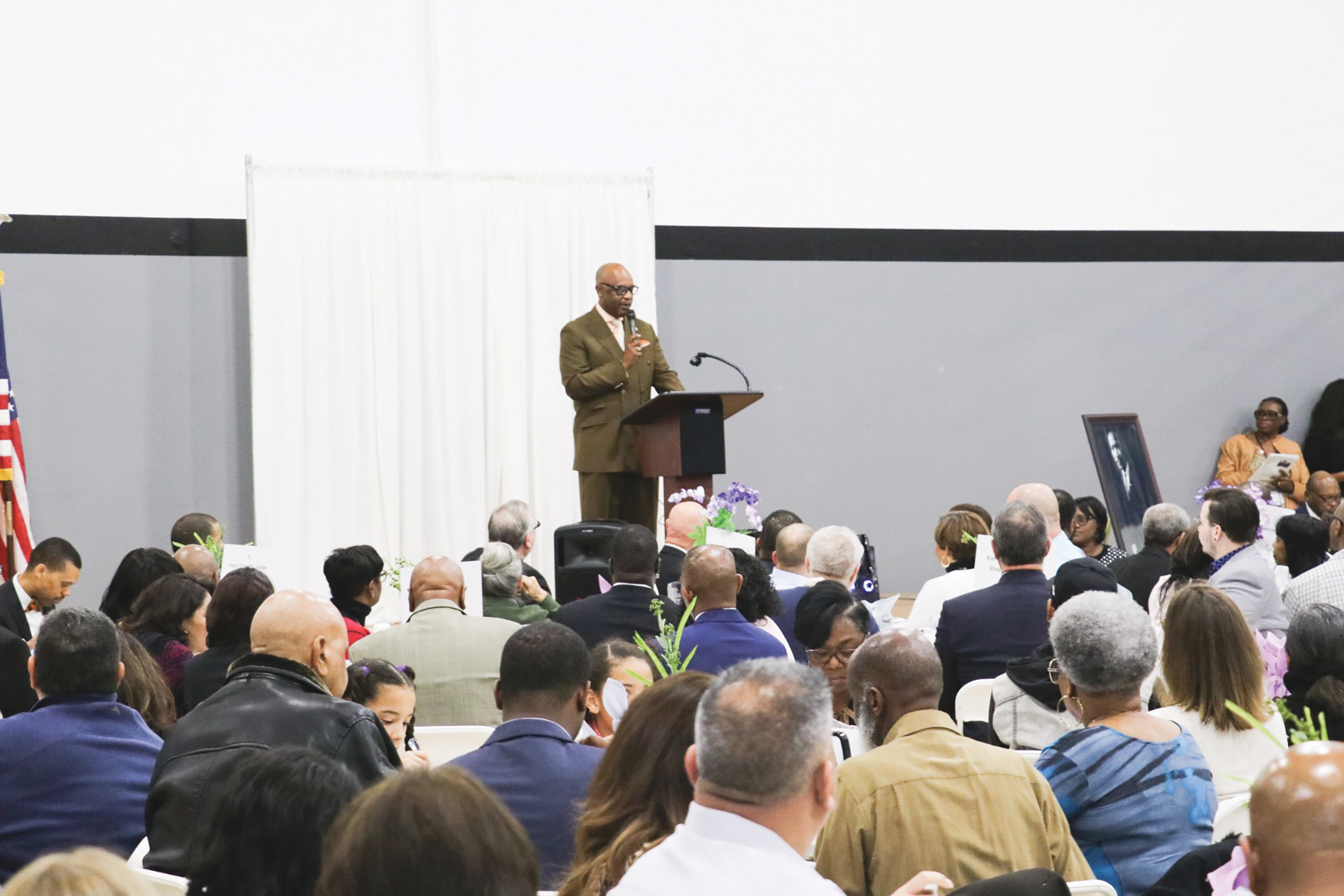 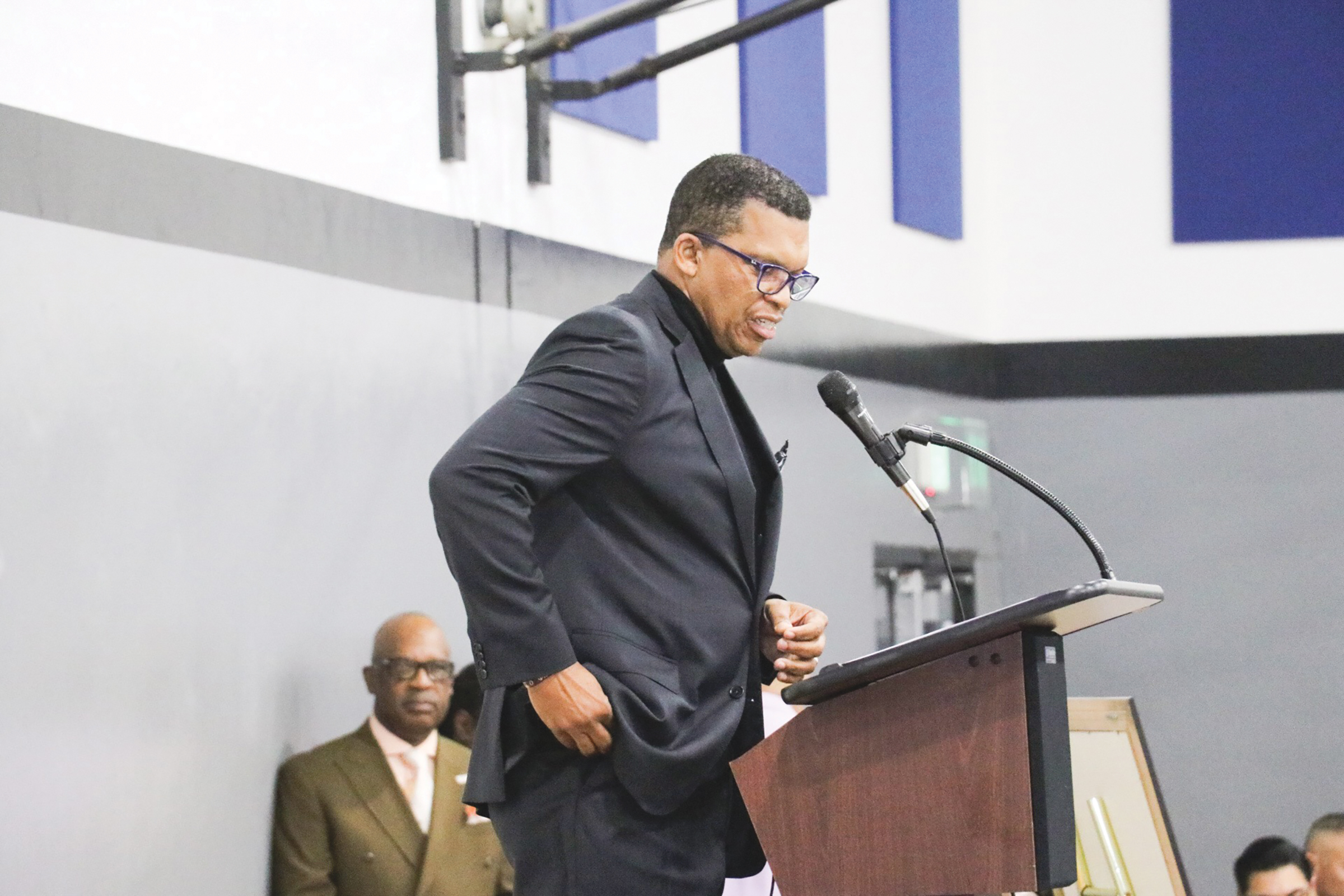 The crowd of 480 feasted on a buffet-style breakfast, prior to the celebration getting underway.

Mayor Karen Goh presented a proclamation and addressed the racially-mixed crowd by stating, “It’s by the grace of God, as a community, that we are gathered together this day.”

Goh spoke of the importance of Dr. King’s vision and from a quote of his 1968 sermon, when he preached from the pulpit of Ebenezer Baptist Church, “The Drum Major Instinct”.

At many intervals during his speech, the crowd responded with such loud applause in approval of his comments.

Prince quoted several excerpts from speeches and quotes of Dr. King.  ‘But tragically and unfortunately, there is another America. This other America has a daily ugliness about it that constantly transforms the ebulliency of hope into the fatigue of despair.’

“What King saw in 1968 and what we should recognize today is that, it is useless to try to address race without also talking on the larger issues of inequality”, Prince said.

“We’ve showed up at the polls, we’ve donated money”, he said. All of you are helping to pay back 502 million dollars on Measure J for Bakersfield College, which was so desperately needed.

“You’re also paying for the new 500 million dollar High School, explained Prince. Contracts are starting to be awarded and I don’t think we’re getting too many phone calls. We’re not being solicited to bid on these services. Today, we’re looking for more than publicity and an act; we’re looking for a contract.”

Prince concluded the thirty-five minute speech with accolades for the several outstanding youths who have “aimed high” in spite of hardships and challenges that many of them faced and successfully overcame.

“Tatyana Pryor was one of those youths who aimed high, Prince said. After losing her mother in high school, Pryor’s grades began to suffer. She was later told by a counselor that “she wasn’t college material”, still Pryor walked across the stage at Clark University with a Bachelor’s Degree in 2018 and in a couple of months will receive her Master’s Degree from CSUB at the young age of 22.”

Pryor sat at a table and wept as Prince shared her story.

The 3-hour celebration concluded with the presentation of awards to the eight honorees.

Dr. Sonya Christian, President of Bakersfield College received the Rev. Dr. MLK Jr. & Councilman Vernon Strong Visionaries Award.  Under Christian’s leadership, she has maintained the institution’s 100-plus year history of quality instruction while shepherding BC through an exciting phase of exciting opportunities for current and future students.

Joseph Coley graduated from Temple University with a degree in Journalism and later opened and operated the circulation business in Bakersfield, Calif.

Coley met the late Ventura Watson and later founded The Bakersfield News Observer, with Watson serving as managing editor. Coley served as an officer for the NAACP, supporting their protest of police brutality and alleged racism involving the arrests of local African-Americans. In 1990 Coley launched the Annual Black History Essay Contest and encouraged students to write about black history in addition to their family experiences.  Coley felt there was a need to continue to educate the next generation of youth about black history, black struggles, black inventions, the voting act, and laws and bills passed to protect the black culture. He wanted other cultures and groups to learn how the successes of the black struggles impacted everyday life. The BNO will celebrate its 42nd year of operations in Kern County, Los Angeles, and The Valley (Lancaster and Palmdale, Ca.) areas.

Judge Schuett was born and raised in Bakersfield, California, and he attended the public school system before attending college at UCLA. After graduating with a degree in economics, Schuett attended UCLA School of Law and obtained his law degree.   Judge Schuett established and funded the mentorship program at Leo Hart Elementary School in 2006. He has provided quarterly mentoring sessions for a group of young men with mentors from prominent black leaders in the community along with lunch.

Davis’ passion to serve his community has been instilled in him since he was a kid. April 23, 2006 was a very important day in Wesley’s life, on that day his 16-year old brother, Wendale Davis was murdered. From that day forward Wesley made a commitment to support the community of Bakersfield and to be an answer to the problems that exist within the community.

Sanders attended Moler Barber College where he received his barber license in January 1960. He worked for two different barber shops until he ventured out on his own in March of 1967. Sanders worked by appointment, yet he is always ready to listen to a client’s problems and provide them with good sound advice. Dorsh is an avid cyclist, and ultra-marathon runner, and he has a love for studying God’s Word.

BHH specializes in the diagnosis and treatment of heart and vascular disease, but also care for a wide range of other medical and surgical patients. Family members are welcome and are encouraged to become involved in the care of their loved ones. This gives the opportunity for family members to understand cardiovascular disease and take an active role in the recovery process.

Several events following the celebration, including a march, were scheduled to convene throughout the community in honor of Dr. King.