As soon as I convinced myself to go and look at the cats available for adoption for just $20 that day—shots, spay/neuter and all—I knew I would be coming home with a kitten… 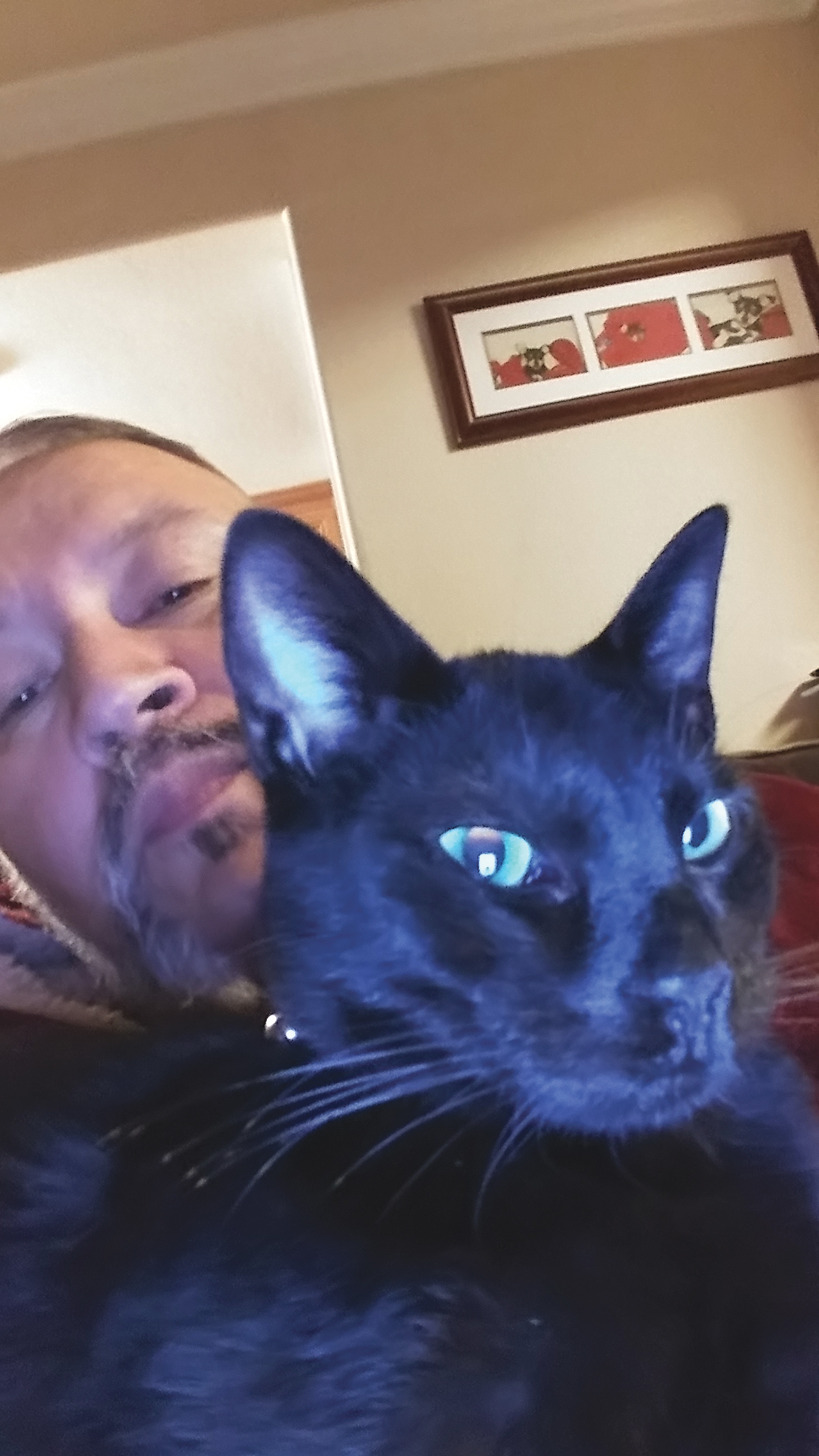 By Louis Medina, Writers of Kern

As soon as I convinced myself to go and look at the cats available for adoption for just $20 that day—shots, spay/neuter and all—I knew I would be coming home with a kitten.

One reason, besides the no-brainer cost, was because I posted about my trip to the SPCA on social media. There are lots of cat lovers on Facebook, including among my friends. I knew they were going to urge me on. I think I wanted them to.

Many of them, like me, thought I should get a buddy for my recently rescued Rescue, a stray orange and white male tabby who had been with me for close to four months.

But a few of them were unquestioningly clear about their vicariousness: They wanted me to adopt a black cat.

It was, after all, August 17: National Black Cat Appreciation Day.

Even knowing that, I was stunned as soon as I walked through the sally port into the shelter’s cattery.

It was as if a 3D printer had run amok and produced copy after copy of black kittens: cartoon-like smudges with little green dots for eyes that were playing or running or resting or grooming throughout the caged structure.

“Like any of ‘em?” the shelter worker asked after a few moments.

“I don’t know. They all look alike,” I chuckled.

“See if one of them comes to you,” he suggested.

I sat down on a bench and rested my arm on a nearby shelf. Eventually one came: a little thing—three, four months old. It got up on the shelf, found its way into the crook of my arm and snuggled there.

The shelter worker raised his eyebrows and nodded his, “See, I told you.”

I’ve learned a lot about humans and cats since I adopted Groom, whom I named after a tiny town on the Texas Panhandle, about 40 miles east of Amarillo on Interstate 40. I stopped there on a trip a few years ago, to see the town’s famous landmark: a 19-story cross that is visible for miles.

My Groom and his census-designated place of a namesake—with some 600 residents, 95 percent of whom are white—don’t really have anything in common. I just like the name, and on that road trip of endless skies, giant crosses and grain silos, I had hoped to someday have a male pet whom it would suit.

A groom is, after all, someone you pledge a vow of love and loyalty to. The adoption paperwork at the SPCA is my and Groom’s owner-pet marriage certificate.

A groom is handsome. Sometimes, when my Groom climbs up a tree and rests on a branch, he looks as sleek and regal as a panther. His coat shines like obsidian in the sunlight. His eyes are as green as the finest jade.

A newlywed groom can be annoyingly loving. Whenever he is in his travel crate in the car, Groom meows nonstop until I put my fingers through the grill for him to rub his muzzle against. Only when he feels my touch does he quiet down. Early in the morning, he wakes me up with ticklish, whiskery cuddles, reverberating purrs and prickly kneads of my chest and arms. No love bites from him yet. Plenty from Rescue. Painful feline affection from both.

Groom and Rescue are the new loves in my and each other’s lives. They play-wrestle constantly. Cat brotherly love.

But Groom is black. I’m sure he’s not aware of that—in the human-value-laden sense of the word. Neither is Rescue. Neither are the other cats in the neighborhood who come around looking to play with them.

I, being human, however, am inevitably conscious of Groom’s blackness and understand the disadvantages he faces: vulnerabilities to dangers caused by humans, many of whom have a difficult time with the color black.

Because Groom is hard to see in the dark, I have to be careful where I step when I get out of bed with the light off. I have to try to have him back indoors before the sun goes down, too: don’t want him wandering in front of a car whose driver might miss seeing him. But it’s not always easy to get him to come back in the house before dark. He is, after all, a prowler. And the night is fun for him.

Then there are the superstitions and urban legends.

Black cats are bad luck—don’t let one cross your path!

Don’t let your black cat out on Halloween—people steal black cats so they can sacrifice them to the devil.

Because in the minds of ignorant humans, black is a bad, evil, dangerous, undesirable color.

My friends who urged me to adopt Groom know about these human prejudices that make black cats less adoptable than other cats. Some own black cats themselves and swear they are more loving than other cats. Perhaps they recognize that human love is not doled out as generously to them, and therefore end up appreciating their owners more.

No wonder a “Black Cat Lives Matter” day is necessary and our local SPCA adopts them out for a mere $20 then, in the hope of finding homes for a greater number of them.

But I’m glad for my black cat.

Groom has brought only goodness to my life. There’s nothing sinister, ominous, or inherently bad about him. And if I have to work a little harder to discern the features of his beautiful panther like face in the dark, and, for his own protection, bring him back indoors before the sun goes down—the same sun whose warmth he absorbs and radiates back as playfulness and love and life—then I am a better cat parent for it.

The last color you see before the movie starts.

The color of an entire continent.

And the depths of the ocean.

And the dominant gene.

It’s the color of love. Don’t believe me? Just recall the tears shed at the last funeral you attended.

Without black, the North Star of our collective freedom from prejudice could not fully light the way.

I believe that when God made black—arguably the most abundant color of his creation, which paints an entire half of our lifetimes and the light years and light years of the depths of space—he saw that it was good. And he rested. Proud.

Lives colored black matter. They don’t matter more than other-colored lives. Groom doesn’t matter more than Rescue. But his vulnerability—to the disadvantages and dangers posed to him by man, not God—because of his color, means I have to protect him more. Dote on him more. Even the playing field for him. To keep him safe. Absorbing the light. That he’ll turn into playfulness and love and life, making my world that much more beautiful. Because black, through him, will have an important place in it.