Coming up this Saturday, March 2 live on SHOWTIME from Barclays Center, the home of BROOKLYN BOXING™, and presented by Premier Boxing Champions, former Super Welterweight World Champion Erislandy “The American Dream” Lara will look to reclaim a piece of the 154-pound crown when he challenges WBA champion Brian Castaño. 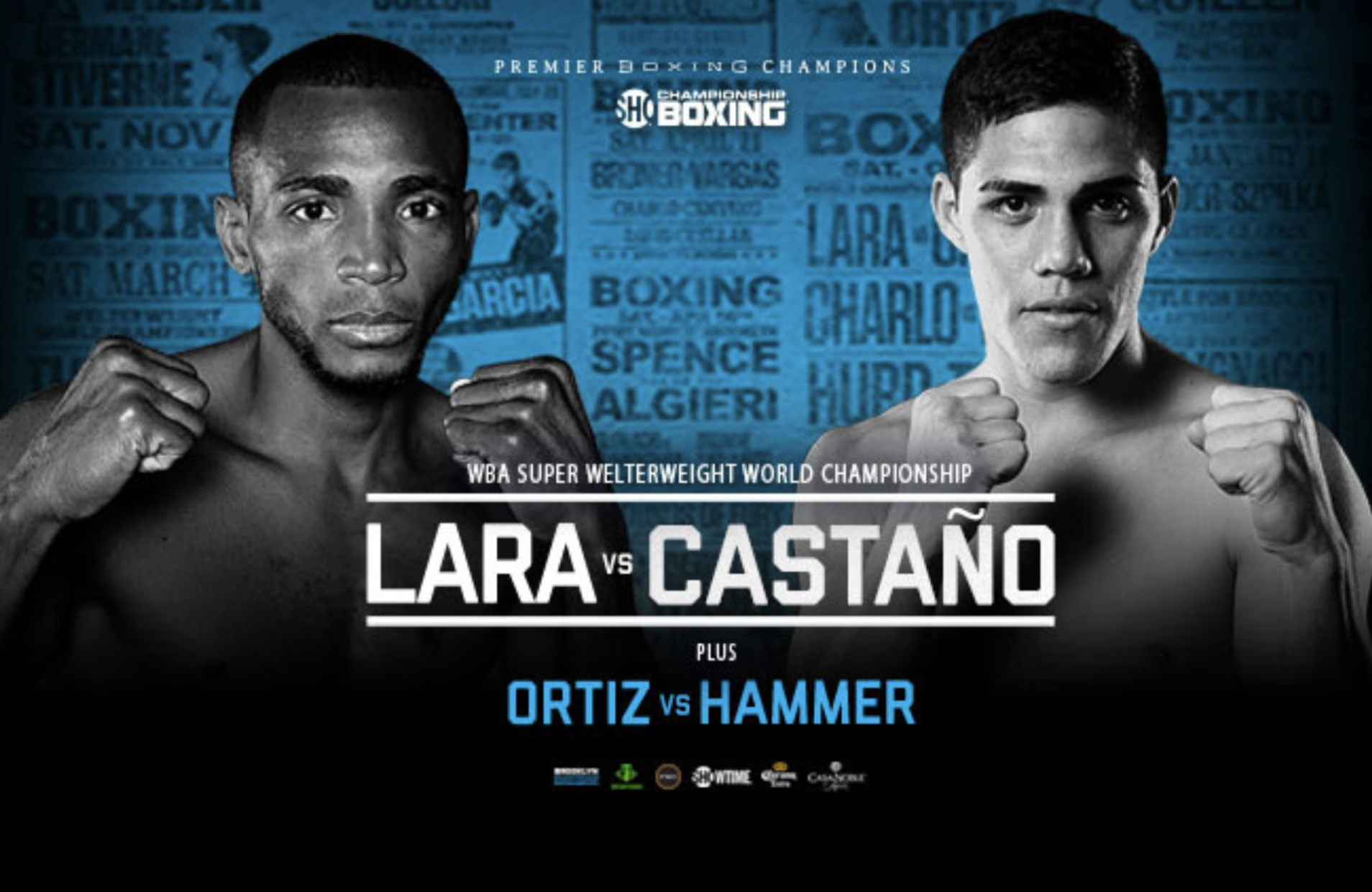 Coming up this Saturday, March 2 live on SHOWTIME from Barclays Center, the home of BROOKLYN BOXING™, and presented by Premier Boxing Champions, former Super Welterweight World Champion Erislandy “The American Dream” Lara will look to reclaim a piece of the 154-pound crown when he challenges WBA champion Brian Castaño.

“Brian Castaño is coming into this fight with an undefeated record, but it’s nothing I haven’t seen before,” said Lara. “This will be my third fight in a row versus an undefeated fighter. I’m taking this very seriously. Stylistically, I feel I’m the superior fighter, but he’s a very strong champion. I will be prepared to take back a title in this great division, then look to the biggest fights that are out there.”

One of the big fights that could be out there for Lara is a rematch with unified 154-pound champion Jarrett Hurd. Lara dropped a split-decision to Hurd in a unification showdown on SHOWTIME that was the consensus 2018 “Fight of the Year”, having been recognized by the BWAA, ESPN and Sporting News, amongst others.

“The fight against Hurd was a great fight for the fans, but I felt I won seven or eight rounds that night,” said Lara. “To be on the wrong end of another close decision left a bad taste in my mouth. That fight being recognized as ‘Fight of the Year’ shows my versatility as a fighter. I was on the ballot before with Alfredo Angulo, so it was good to get recognized for being a warrior, not only a craftsman. I will always give the fans my all and come March 2, it will be no different.”

Lara is continuing to work with longtime trainer Ronnie Shields in Houston, where Lara has prepared for his matchup with sparring that includes going up against top prospects in 18-year-old Joey Spencer and 24-year-old Eimantas Stanionis.

“Ronnie and I are working great together, and we have an excellent game plan in place,” said Lara. “This is one of the better camps I’ve had the last few years. Having young fighters like Spencer and Stanionis in camp with me is refreshing because I know they are hungry. When we spar, I feed off their energy, because I know they are trying to take their game to the next level, which makes me better. This is a demanding sport and they are definitely pushing me.”

March 2nd also gives Lara a chance to share the stage with another one of Cuba’s best fighters, as Luis Ortiz is set to take on Christian Hammer in the co-main event, making the night a celebration of Cuban boxing.

“Luis Ortiz and I go way back and I’m happy that my brother is fighting on the same card as me,” said Lara. “We’ve gone through a lot since leaving Cuba to pursue our dreams of becoming world champions here in the U.S. Like myself, I know he’s going to be ready to entertain the fans on fight night and make this a memorable night for Cuban boxing!”

Castaño is trained by his former pro boxer father Carlos in the bustling city of Isidro Casanova in Buenos Aires, Argentina. After a long and successful amateur career leading into his pro debut in 2012, Castaño has a chance on March 2 to make a lasting impact with an impressive performance against Lara.

“I’ve been boxing since I was a small child and now this is my opportunity to prove myself on the biggest stage,” said Castaño. “This fight is the moment I’ve been waiting for and the kind of tough challenge that I love. I want to make a statement to the American audience against one of the best fighters in the world.”

In recent years, Argentine fighters such as Marcos Maidana, Jesus Cuellar, and Lucas Matthysse have become champions and stars in the U.S. with their relentless styles they bring into the ring fight after fight. Castaño specifically has spoken to another Argentine great in Sergio Martinez for inspiration as he continues his journey.

“I have a great admiration for the Argentine champions that have made statements and become big names in the U.S. in recent years and I know how difficult that is to achieve.” Said Castaño. “I’ve sat and had great conversations with Sergio Martinez not long ago and I was able to learn a lot from a fighter like that.”

The 29-year-old first won an interim title with a knockout of Emmanuel de Jesus in 2016, before winning tough 12-round battles against Michel Soro, and most recently a final round stoppage win over Cedric Vitu to capture the belt he will defend on March 2. These were the first two times Castaño fought into the 12th round as a pro.

“I learn new things each time I fight,” said Castaño. “When you are a world champion, there are no easy foes. The opponents come stronger and stronger each time. I’ve learned that I have to double my effort every time I get into the ring.”

In Lara, Castaño faces a challenging former amateur world champion who was the longest-reigning titleholder in the 154-pound division before he lost to fellow champion Jarrett Hurd last April on SHOWTIME in 2018’s Fight of the Year. Castaño is aware of what Lara brings to the fight and is preparing to negate it.

“On paper, we know that Lara is a slick fighter that can be difficult to catch, while I’m more like a demolisher that goes after you all fight,” said Castaño. “Lara moves around the ring very wisely and has great timing on the counterpunch. In the ring, you never know how it can play out though. I probably haven’t faced someone like him before, so I have to cut off the ring in an even smarter manner.”

On March 2, Castaño will be looking to take his career to the next level with his performance, knowing that chances at the highest level are hard to come by.

“I’ve taken my career quietly to this point, but I know that I have to make myself known by putting up a great performance in this tough fight,” said Castaño. “I’m prepared to do just that. This is the opportunity that I’ve dreamed of ever since I was a little kid and I have to be ready to rise to the occasion.”

Once again PBC is offering another wonderful fight card for boxing fans to tune-in and enjoy. Tickets for the event, which is promoted by TGB Promotions in association with DiBella Entertainment, are on sale now and can be purchased at ticketmaster.com, barclayscenter.com, or by calling 800-745-3000. Tickets can also be purchased at the American Express Box Office at Barclays Center. Group discounts are available by calling 844-BKLYN-GP. Please share your thoughts on the exciting fight cards Premier Boxing Championship have provided for us boxing fans, week in week out, by commenting in the comment section of this article on www.whatsgoodinsports.com or reaching out to us on twitter @whatsgoodinsports.