Los Angeles- Saturday, May 4, 2019 is one for the history books. A massive, multi-cultural, diverse crowd gathered on Rodeo Road where Martin Luther King, Jr., Boulevard intersects, for a day long music festival and President Barack Obama Naming Ceremony. Ain’t no party like a west coast party!

Groovin’ at the Obama Boulevard Naming Ceremony and Street Festival 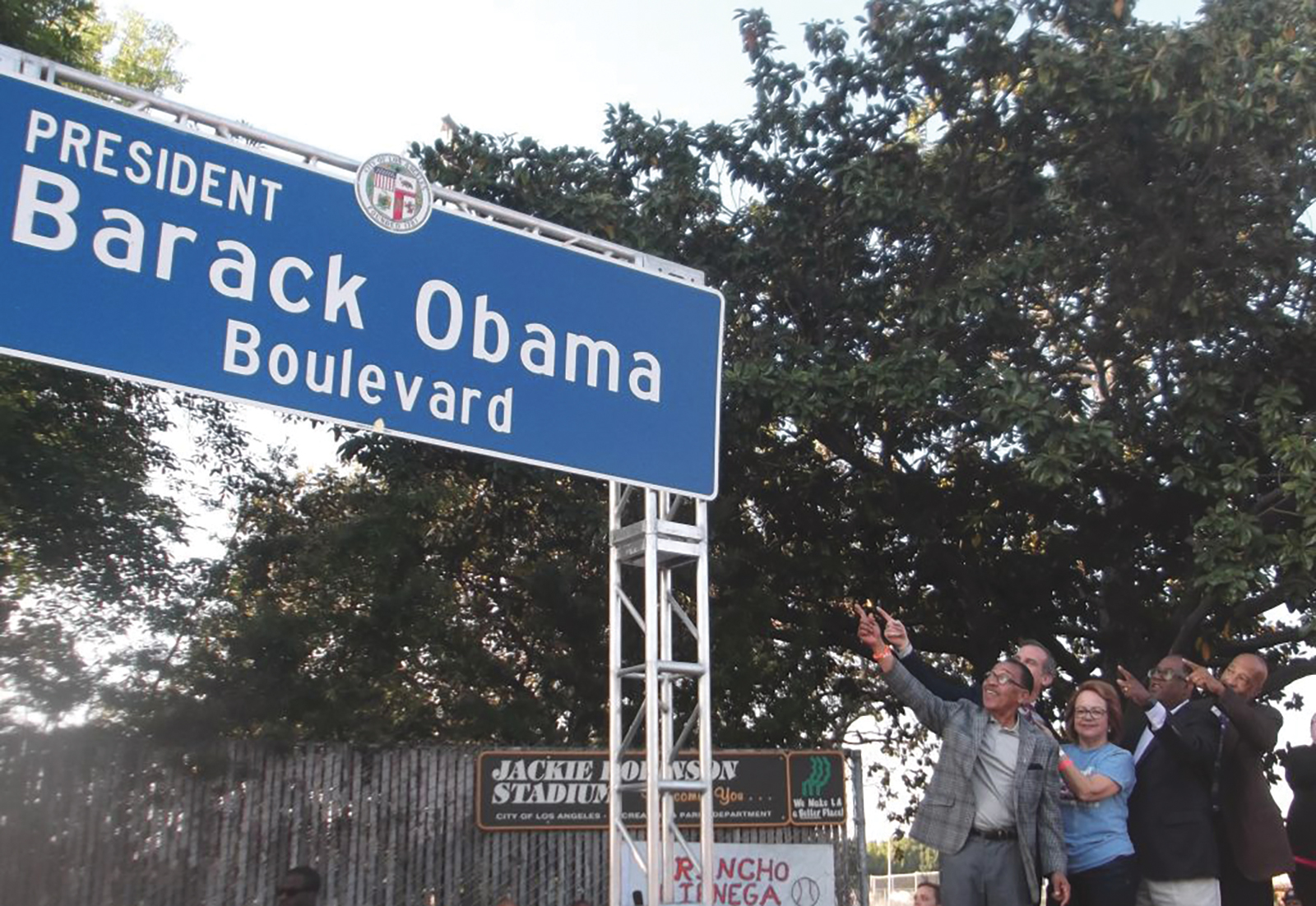 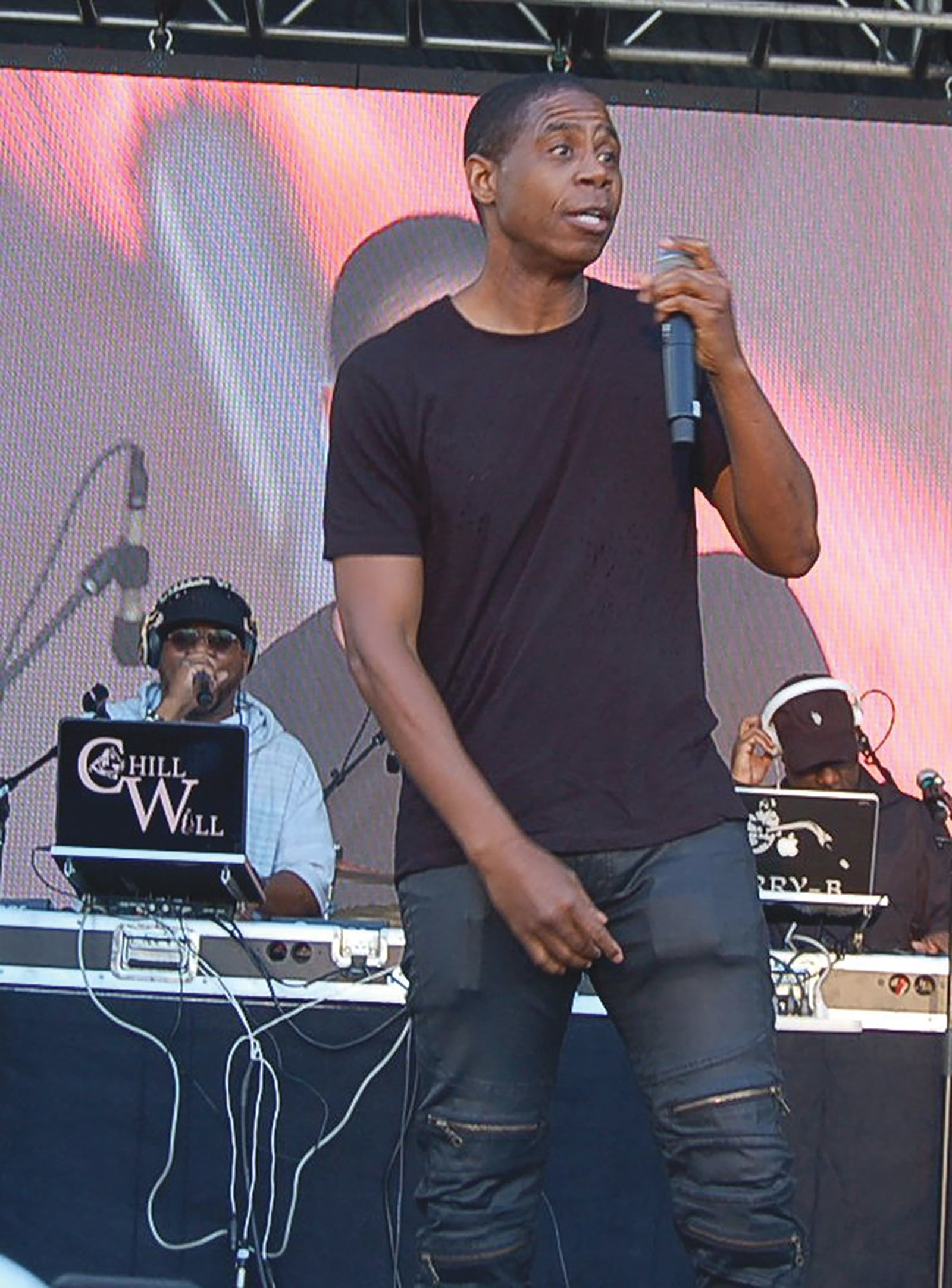 Los Angeles- Saturday, May 4, 2019 is one for the history books. A massive, multi-cultural, diverse crowd gathered on Rodeo Road where Martin Luther King, Jr., Boulevard intersects, for a day long music festival and President Barack Obama Naming Ceremony. Ain’t no party like a west coast party!

Los Angeles City Council President Herb Wesson was joined by Los Angeles Urban League President and CEO Matthew Lawson and Los Angeles Mayor Eric Garcetti to officially unveil Obama Boulevard in honor of America’s 44th President of the United States of America. This day consisted of a free day long music and street festival. It was a pleasure to view a sea of people wearing President Obama gear-buttons, caps, scarves, t-shirts, sweatshirts etc. Multi-generation of family members were present for this historic occasion. People from all walks of life, races and cultures were in attendance.

Singer Randy Newman got it right when he penned the tune “I Love L.A.” The location selected for the ceremony is where Obama Boulevard will intersect with Martin Luther King, Jr. Boulevard in one of Los Angeles’ most iconic Black neighborhoods-creating one of the most significant African-American points of interest in the country. Los Angeles City Officials gave residents and the world another reason to LOVE L.A!

This was a picture-perfect day, neither too hot nor cold, just pleasant with a slight breeze. As I sat down to write, the lyrics for “Groovin” by War sibilated throughout my mind. Sibilate, that’s a word that you don’t hear often.

The gates to the celebrations opened at 12 noon. DJ QwestCoast provided the musical soundtrack for the festivities. Radio Personality Kevin Nash served as Master of Ceremony.

Katalyst Collective is a ten-piece band from Inglewood, California, who opened the show with a set of original tunes to set the tone for the rest of the day.

Singer, songwriter, guitarist Mark Noxx from Sacramento delighted the crowd during his time in the spotlight. Jai is a sensational, 14-year-old talented singer. He wowed the crowd with his vocal stylings on the classic tunes “What’s Going On,” by Marvin Gaye and “Change is Gonna Come,” by Sam Cooke.

Youth who are making a difference in the community was well represented and recognized during the program. Thandie Abdullah, co-founder of The Black Lives Matter Youth Vanguard, and other members of the group, spoke eloquently about the organization. Ms. Abdullah was named among Times Magazines 25 Most Influential Teens of 2018.

Michael Boyer II, aka- VERBS dropped some positive lyrics to the delight of the crowd. T-Lyons is a young rapper from New Orleans delivered and uplifting set of original tunes “We Gonna Make It,” and “Come Smile with Me.” This is additional proof of a young man making a difference in the community.

Council President Herb Wesson welcomed Dignitaries from the Local, State and Federal levels of Government onstage for remarks. Several Mayors or representatives from surrounding cities were also present. Congresswomen Karen Bass gave a powerful speech that resonated with the crowd.

Radio Personality Dominique DiPrima, 102.3 FM, RadioFree, KJLH took over as Mistress of Ceremony for the second half of the show. Gavilyn a Latin American hip hop artist rocked the proceedings with a set of original tunes. Music royalty was in the house. Alex Isley is the daughter of Ernie Isley, and the niece of the legendary group Isley Brothers. The crowd and I were vibing with her on the tunes “About Him,” “La Brea,” and “We’ll Always Have Paris.”

The next segment of the program featured an electric, energetic performances that consisted of DJ Tee holding it down of the ones and twos, followed by DJ Battlecat manning the boards for Kurupt.

YO YO came up next for a powerful performance and to showcase several young up and coming hip hip artists who are fast making a name for themselves, which was apparent in the warm welcomed they received from the audience. BJ The Chicago Kid was another highlight of the music festival.

Keisha Renee a contestant on The Voice, showcased her country/soulful vocal styling on tune original songs “I Hope You dance and “Let’s Get Away,” from her latest EP The Road Less Travelled.

The Spotlight shifted over to a smaller platform for the unveiling of the Obama Boulevard sign. “The renaming of Rodeo Boulevard to Obama Boulevard represents a truly historic day for our city and country” Los Angeles City Council President Herb Wesson, said in a statement. He went on to state, “With this change, we are publicly documenting what Obama’s legacy as our nation’s first black President means to our city and our South Los Angeles community. For every child who will drive down this street and see the President’s name, this will serve as a physical reminder that no goal is out of reach and that no dream is too big.”

Los Angeles County Supervisor Mark Ridley-Thomas said, “In this moment of political tumult on the national level, it’s important to take stock of the tremendous accomplishment that Barack Obama’s presidency.” “His ascent to our nation’s office represents, in some ways, the fulfillment of Martin Luther King, Jr.’s dream, spoken about on the steps of the Lincoln Memorial more than 55 years ago.”

Los Angeles Urban League President and CEO Matthew Lawson read a letter from President Barack Obama expressing his heartfelt appreciations thanks to the City of Los Angeles for this wonderful naming occasion.

The focus reverted over to the Main Stage as Sheila E graced the stage to perform a classic hit, “Gonna Have a Funky Good Time.”

Beat Box King Doug E. Fresh aided by Chill Will and Barry Bon the ones and twos closed out this amazing, magnificent and historic event on a rousing note.

Stevie Wonder appeared on stage just when we thought that the show was over. He was greeted by a thunderous round of applause.

Obama Boulevard will replace Rodeo Boulevard, a 3.5 miles stretch of road that runs from “Hearth of Screenland” better known as Culver City, to Mid-City Los Angeles, passing by the legendary Dorsey High School and communities of Baldwin Hills and Rancho Cienega Sports Center and Park-2007 site of a rally for then-presidential candidate Barack Obama near the beginning of his historic presidential campaign.

With the addition of Barack Obama Boulevard in America’s second largest city, President’s Row is officially established in Los Angeles including nearby George Washington Boulevard, Adams Boulevard and Thomas Jefferson Boulevard. Approximately 100 street signs will be replaced with the new Obama Boulevard sign.

The event was produced by Bridge Street, which recently produced the 50th Anniversary of Martin Luther King, Jr.’s Mountaintop Speech in Memphis.