Four lucky Bakersfield College students, who are part of the Umoja Community African American Success Through Excellence and Persistence (ASTEP) program, went on a tour of Historically Black Colleges and Universities (HBCU)s. It was a life changing trip, during which they were able to tour five colleges in Georgia and Alabama as well as experience historic cultural sites. 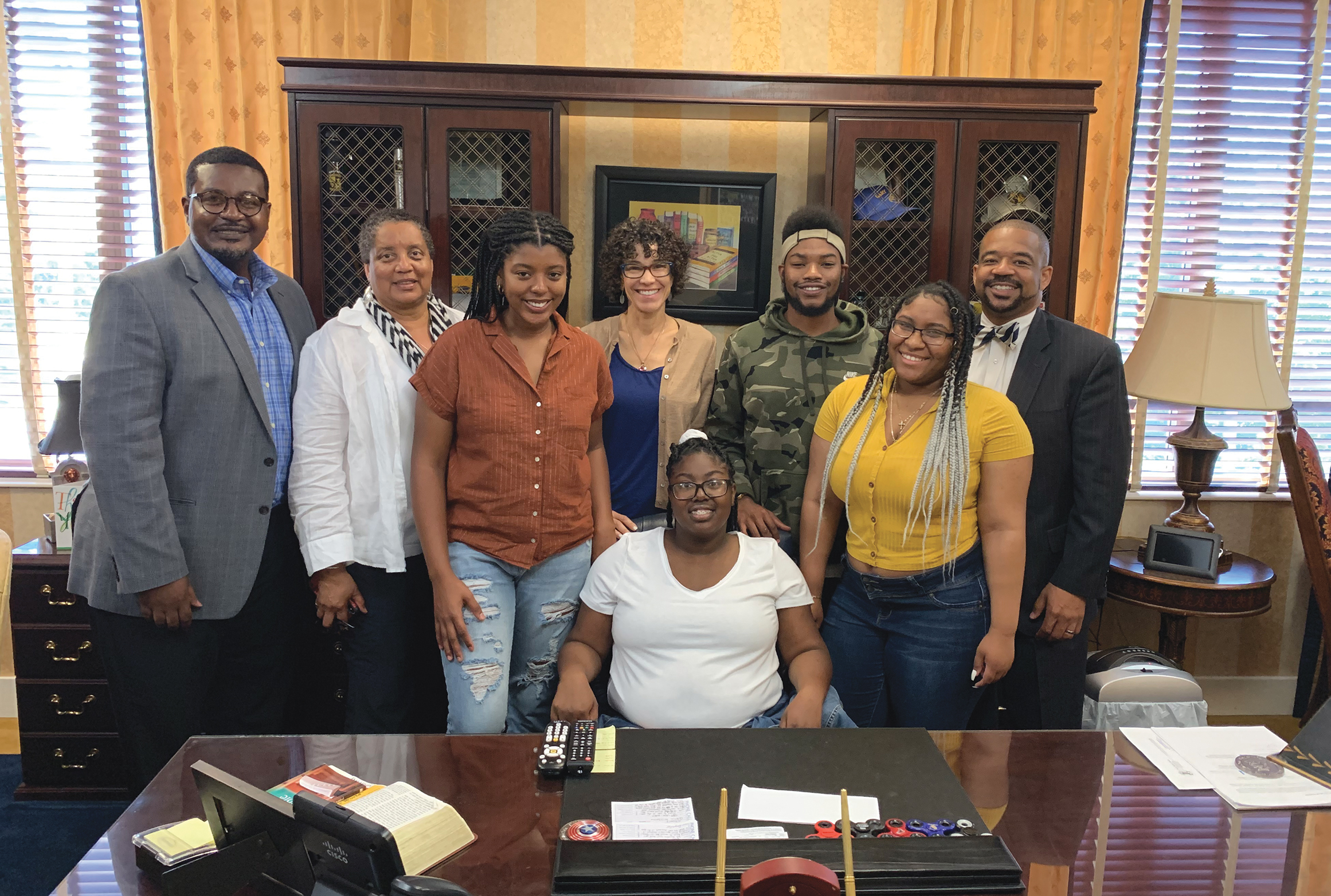 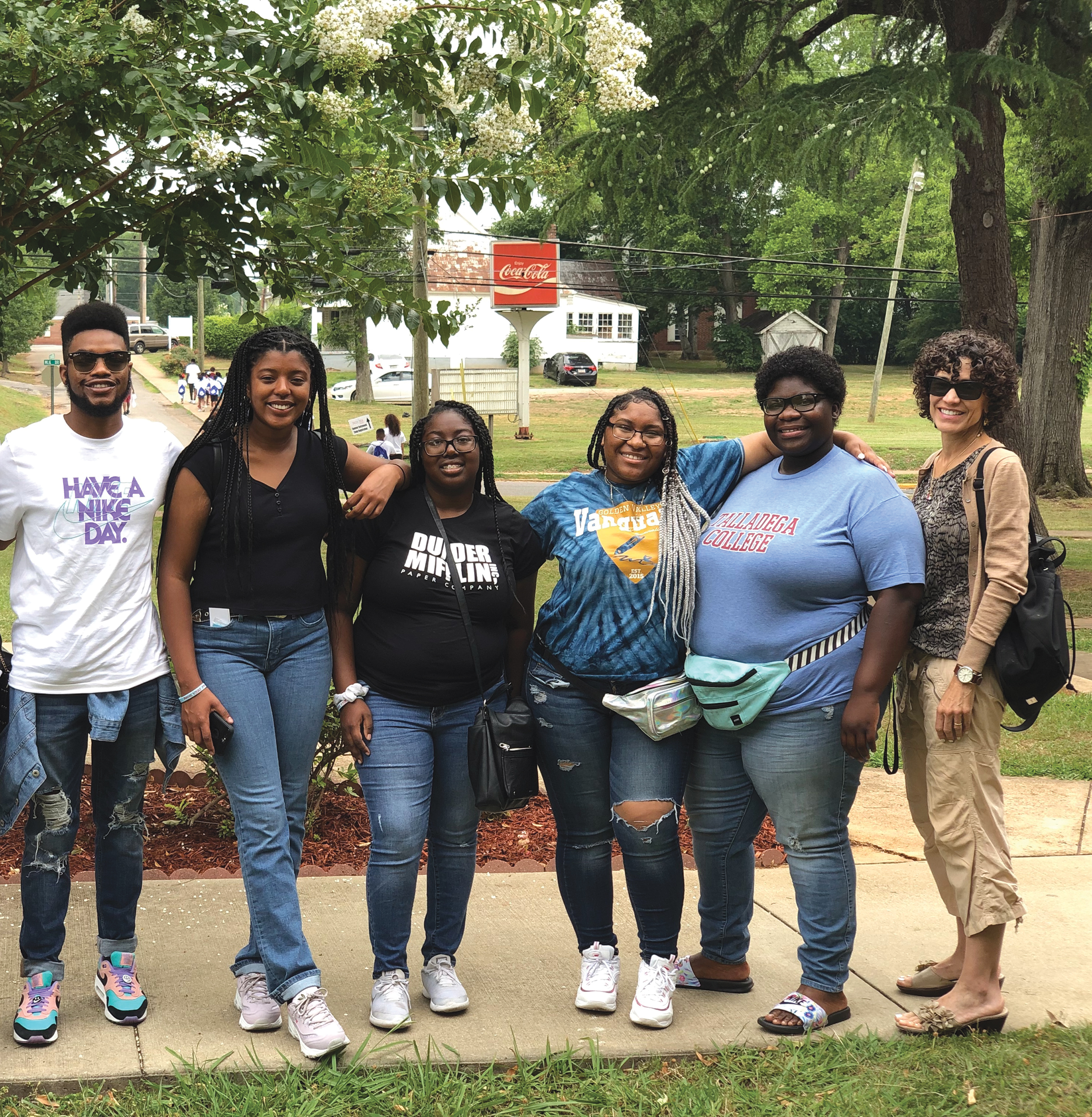 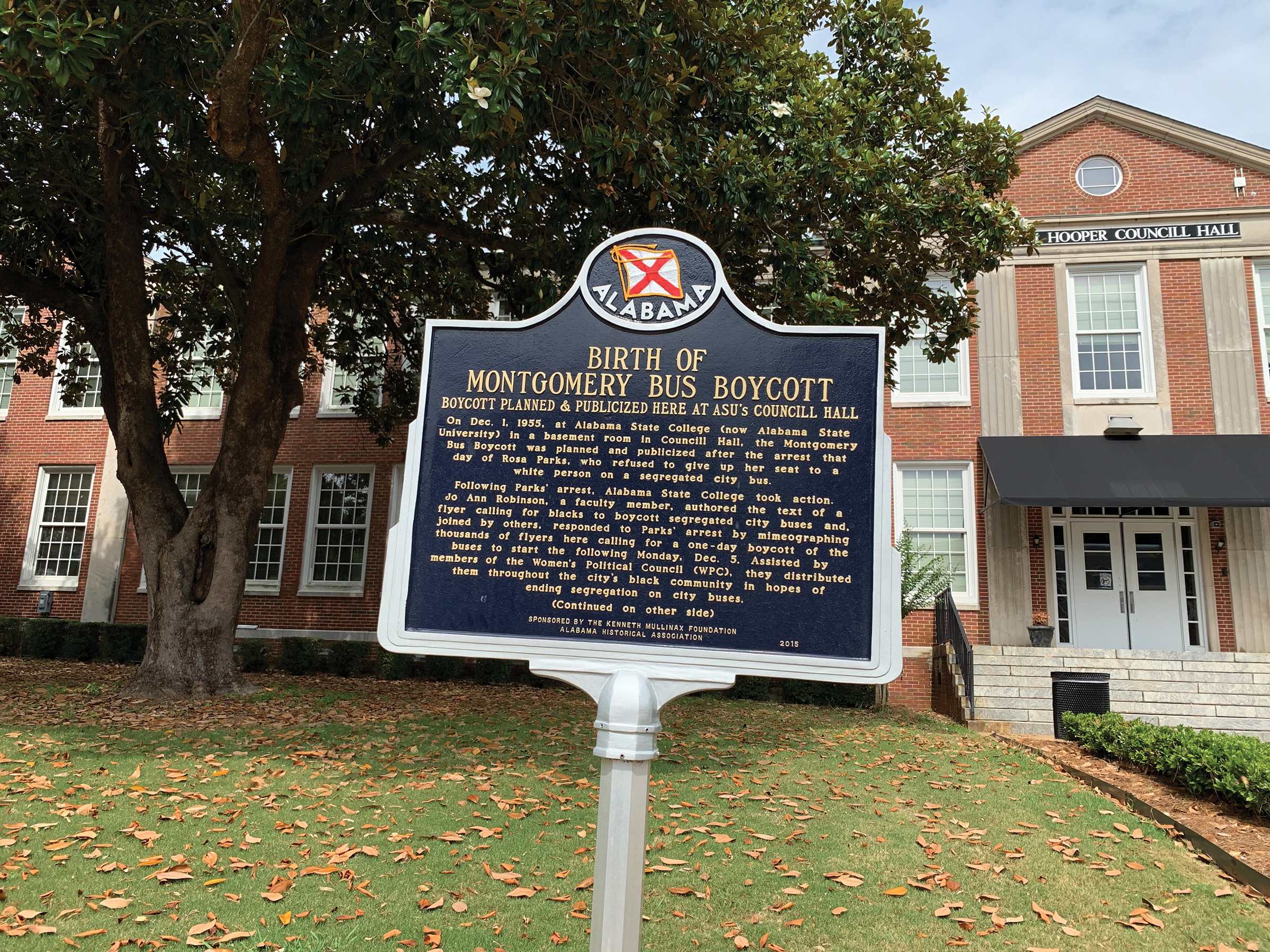 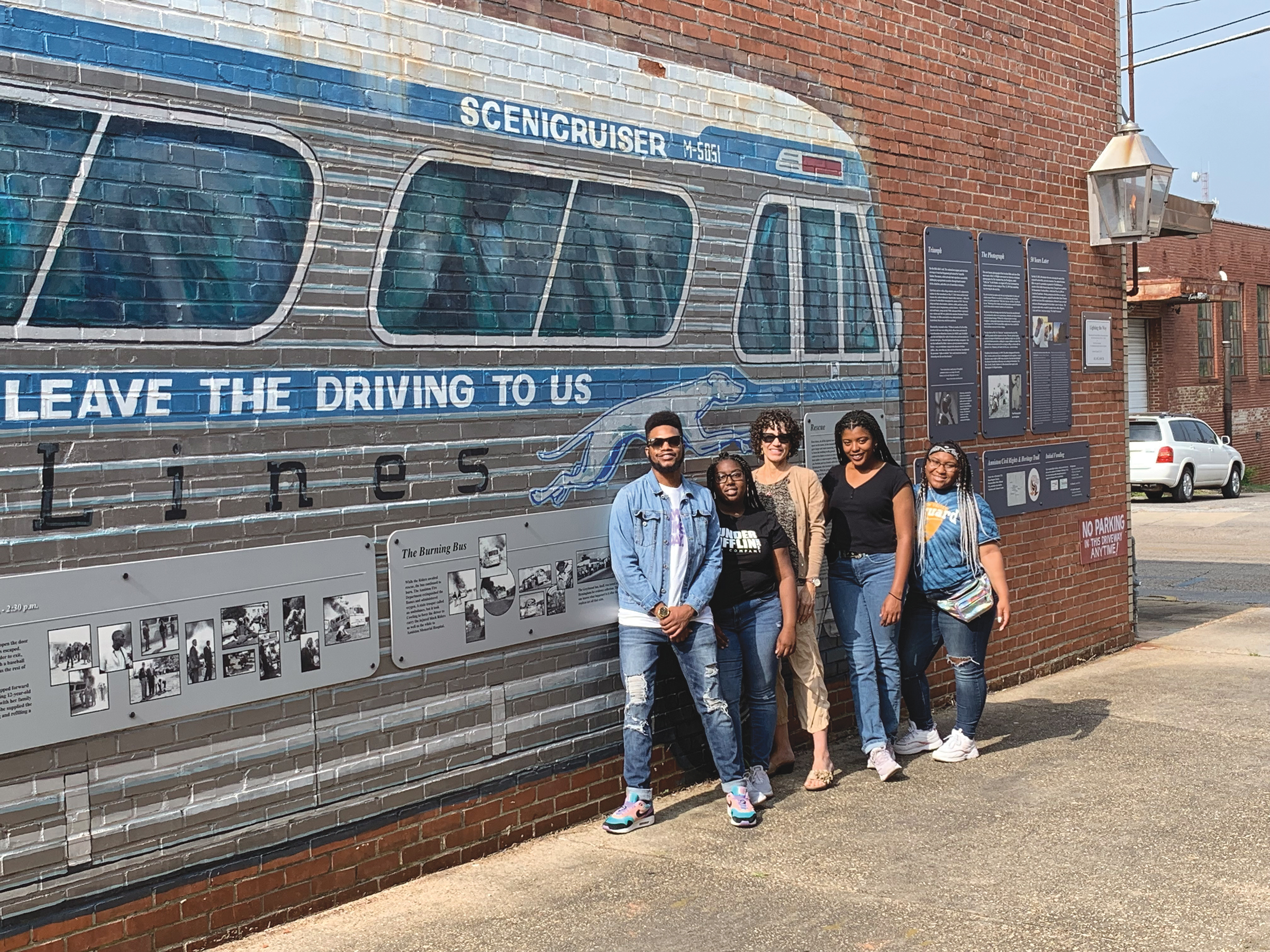 Four lucky Bakersfield College students, who are part of the Umoja Community African American Success Through Excellence and Persistence (ASTEP) program, went on a tour of Historically Black Colleges and Universities (HBCU)s. It was a life changing trip, during which they were able to tour five colleges in Georgia and Alabama as well as experience historic cultural sites.

The Umoja program includes English courses that are required for graduation, academic and personal counseling, mentoring, study support, and trips and activities. For more information and to apply, see BC’s website.

The students earned their spot by excelling academically and having an interest in transferring to an HBCU. Students are more likely to transfer to a four-year college out of town if they visit and feel the campus and can envision themselves there. While CSUB provides an excellent education, transferring to an HBCU after attending BC allows students the ability to save money and to broaden their horizons.

Explained student Michaela Edwards: “The trip gave me an experience that I never knew that I needed. I had never visited a college campus other than my own (BC) and my first experience doing so was HBCUs in the South. Being able to mix in civil rights sites added to the overall experience. I’ve never felt as in touch with my people and ancestors.”

Clark Atlanta University (CAU) is part of the part of the complex that includes all-male Morehouse and all-female Spelman. One huge advantage of each is that all students can take classes in the other colleges.

Tour guide and senior assistant director of transfer Andra Brantley touted the honors programs,availability of student housing, and the advantages of being in Atlanta with its rich history as well as access to Fortune 500 companies that provide jobs and internships.

Keon Warren was sold on Morehouse: “I”d like to attend Morehouse because it’s always been the hub of creating young Black male leaders. With notable alumni such as Martin Luther King, Jr., it’s almost impossible to feel Morehouse’s rich African-American history when you’re on campus.”

The historic site includes his childhood home, the graves of Dr. King and Mrs. Coretta Scott King, the Ebenezer Baptist Church, and two museums about Dr. King and his role in the Civil Rights Movement.

When we arrived at Fort Valley, the tour guide escorted us into a conference room where deans and Vice Presidents were meeting. I thought it was a mistake at first, but the administrators were expecting us and welcomed the students and asked each one about their major. The dean in charge of that area told each student what the college had to offer him/her and encouraged each to apply.

Student Dujour Sams responded to the personalized information and intends to apply: “Despite being a STEM-focused school, they made me feel like they had something for me in regards to my art major.”

That kind of student-centered, family feel characterizes HBCUs and contributes to their high student success rates. Many Umoja students are attracted to HBCUs because the experience is an extension of the love and support they experience in the BC Umoja program.

Even Fort Valley President Dr. Paul Jones, who grew up in Los Angeles, wasn’t too busy to stop and engage students. He pointed out all the renovation going on and the scholarships that covers out-of-state fees.

Just an hour outside of Birmingham, we visited Talladega College. One very special part of the visit was reconnecting with BC transfer student and Umoja participant Tonysha Miles, who will graduate in December. Of Talladega, she said “I love it here. All the resources I need are here.”

Mr. Lon Weind, who conducted the tour, touted the family feel and caring professors. In fact, he stopped several professors and staff, all of whom interacted with students and welcomed them. Every one of them expressed a desire to see students graduate. “We try to remove all obstacles to help students succeed,” he added.

Weind also shared some African-American history with the students. He showed them a door leading to the Underground Railroad, a series of tunnels that the enslaved used to travel North to freedom. Students were amazed to find out that there is network under the College.

Site where bus full of Freedom Riders was attacked and burned

In Anniston, Alabama in an alley is the site of the former Greyhound Bus Terminal where Public Safety Commissioner Bull Connor allowed the KKK to attack the Freedom Riders, a group of young Black and white people who tested the segregation laws. They

rode interstate busses into the South to test the non-enforcement of Supreme Court decisions that outlawed segregated public busses.

At this particular stop in 1961, passengers were terrorized and the windows broken and tires slashed. A few miles later, we saw the place where they had to stop and a burning rag was thrown into the bus; the passengers barely escaped.

Also in Birmingham, we stopped at the Sixteenth Street Baptist Church that was bombed in 1963 and resulted in the death of four girls who were inside the church and two boys who were outside the church.

Just 45 minutes outside of Montgomery, Alabama is the beautiful, expansive campus of Tuskegee University. It was founded by Booker T. Washington, whose former house and grave are on the campus, Tuskegee is one of the largest campuses we visited with 5,000 acres and 3,000 students.

Kierra Littles said, “My favorite school was Tuskegee because of the community feel and their English program. I also liked it because they always had different activities on campus.”

Kerry Jones, who conducted the tour, explained the history of Washington founding the college, the eight undergraduate colleges and graduate programs they offer, the availability of scholarships, and the caring professors. Recruiter Jerrica Russaw encouraged students to get out of their comfort zone and attend Tuskegee to meet people from around the world.\

The museum is on the campus of Tuskegee University. Even though African Americans were thought to be incapable of being pilots in the military, President Roosevelt authorized the training of a group of Black pilots who went on to run combat missions during World War II. They were trained at Tuskegee University and formed the 99th squad and later the 332nd squad and became the most victorious and decorated squads. They became known as the red tails when they painted the tails of their planes red. They fought segregation in the military after not being allowed to enter the officer’s clubs and when they arrived home and couldn’t get jobs as pilots. The museum included a film as well as interactive exhibits and a replica of a red tail plane.

In Montgomery, Alabama is Alabama State University(ASU). Due to its location, the campus community was involved in organizing the Montgomery bus boycott, which was started by Rosa Parks in December 1955 and led by Dr. King. We were shown the

building where Dr. King had to hide to escape the KKK. Famous alumni include Rosa Parks and Ralph Albernathy.

The tour guide touted their campus life including the football team and internship and research opportunities. She encouraged students to aim for a mix of studying and being involved on campus.

We were impressed with their campus sculpture that means no matter what our ancestors when through, they made it and we can get through our situation.

Historic sites we saw in Montgomery included where Rosa Parks boarded the bus in 1955 and decided not to give up her seat; the Dexter Ave church where Martin Luther King preached and was elected head of the Montgomery Improvement Association; the site of a former slave market; and the parsonage where Martin Luther King and his family lived. It’s different to learn about history from a book and to actually see the places where our ancestors suffered and fought for equal rights.

Dujour Sams summed it up: “I recognize how great of an opportunity it is to be a part of a trip like this. Going into it, I was more focused on figuring out what school I was going to transfer to. Coming out, I feel empowered by the history of the schools as well as the historical sites we visited.”

Dr. Parks can be reached at pparks@bakersfieldcollege.edu.