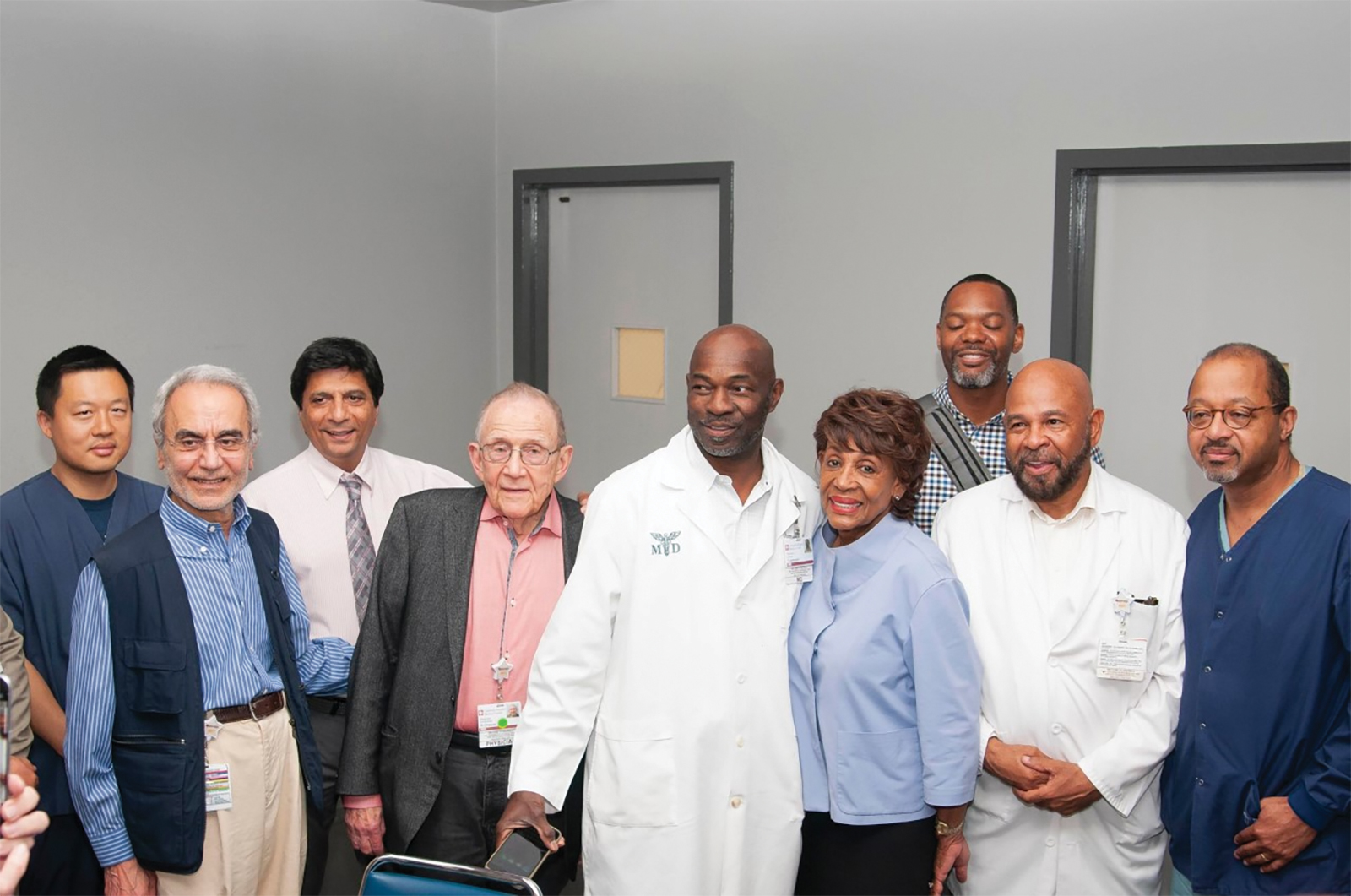 LOS ANGELES – In support of House Democrats’ “Healthcare Weekend of Action,” Congresswoman Maxine Waters (CA-43), Chairwoman of the House Committee on Financial Services and Co-Chair of the bipartisan Congressional Task Force on Alzheimer’s Disease, hosted a Healthcare Roundtable at Centinela Hospital Medical Center in Inglewood, CA. Centinela Hospital has served residents of Inglewood and the surrounding areas since 1924. Each year it provides health services to more than 140,000 patients and their families.

During the event, Congresswoman Waters met with physicians and key hospital stakeholders, including Centinela COO & Interim CEO, Mohammad Naser, R.N. and Chief Medical Officer, Paryus Patel, M.D., who presented and led an engaging discussion on the Trump administration’s efforts to weaken the Patient Protection and Affordable Care Act (ACA); the impact of these actions on patients, doctors, and families; and, the legislation House Democrats have passed to strengthen the ACA.

Congresswoman Waters also heard from healthcare professionals who are concerned about a wide range of issues, including the rising cost of prescription drugs, the future of Medicare and Medicaid, and the strain placed on many hospitals and emergency rooms across the country because of funding decreases for programs like Medicaid DHS, which assists hospitals that care for a disproportionate share of uninsured patients. Edly Atherley, the Director of Performance Improvement at Centinela Hospital Medical Center,

recommended that legislators and the general public use the former name of the ACA, the Patient Protection and Affordable Care Act, in order to emphasize the way in which the ACA protects all patients – no matter their income or illness. Congresswoman Waters agreed to share this feedback with the full House Democratic Caucus this week.

“I am so pleased to have led a lively and substantive discussion with physicians and healthcare professionals right here in our community at Centinela Hospital Medical Center about our fight to protect patients and ensure that working families, seniors, veterans, disabled Americans, and people with preexisting conditions have the quality and affordable healthcare they deserve,” said Congresswoman Maxine Waters. “My Democratic colleagues and I are on the frontlines fighting to lower prescription drug prices, strengthen the ACA, and protect Medicare, Medicaid, and preexisting conditions coverage from attacks by Congressional Republicans and the Trump Administration.”

Congresswoman Waters outlined the efforts House Democrats have taken under the leadership of House Speaker Nancy Pelosi, to lower prescription drug prices, preserve pre-existing conditions protections, and strengthen health care, including the passage of H.R.987 – Strengthening Health Care and Lowering Prescription Drug Costs Act.  This bill will lower prescription drug prices, increase competition, and protect people with pre-existing conditions. It also includes Rep. Waters’ amendment, which requires the Department of Health and Human Services to submit to Congress a report on the extent to which increases in prescription drug prices may have caused Medicare beneficiaries to forego recommended treatment, including failing to fill their prescriptions. H.R. 987 with Rep. Waters amendment included was passed by the House of Representatives on May 16th by a vote of 234 to 183.

Since its full implementation in 2014, the Patient Protection and Affordable Care Act, which is also known as Obamacare or the ACA, has provided critical protections for the 130 million people in the U.S. with pre-existing conditions, including more than 16 million Californians with pre-existing conditions. While efforts in Congress to repeal the ACA failed in 2017, the Trump administration is trying to weaken the law, and there are outstanding court challenges, including a Texas v. U.S. lawsuit to declare the law unconstitutional.  This lawsuit would eliminate:

• Protections for people with pre-existing conditions;

• The ban on lifetime and annual limits on health coverage;

• Bans on discriminatory insurance practices that force women to pay more for coverage;

• Young adults’ ability to remain on their parents’ insurance until age 26, and more.