The start of this season for the Los Angeles Chargers has been challenging for a couple of different reasons, mainly injuries and a holdout. Injuries to key players on their defense along with not having their leading rusher from the past few seasons have significantly impacted their ability to win games early on this season. 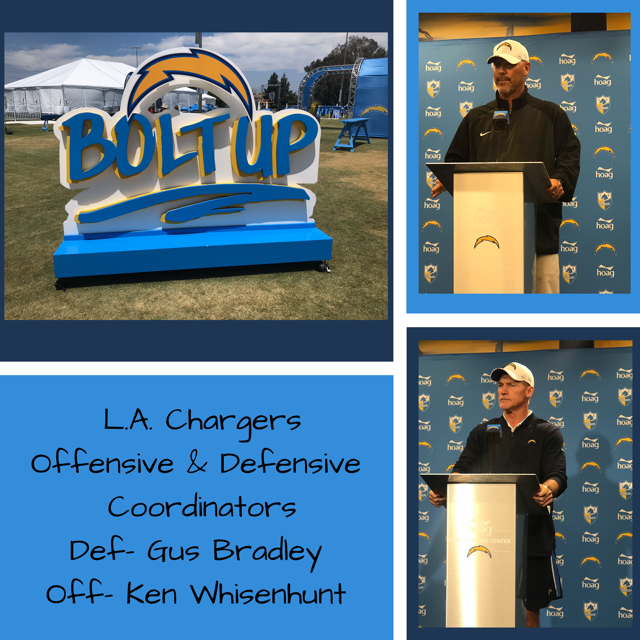 The start of this season for the Los Angeles Chargers has been challenging for a couple of different reasons, mainly injuries and a holdout. Injuries to key players on their defense along with not having their leading rusher from the past few seasons have significantly impacted their ability to win games early on this season. Evidence in this was present in the way their defense started the game against the then winless Denver Broncos, as well as how they struggled to effectively struggle in scoring opportunities when in position.

I was fortunate enough to talk discuss each of these issues with their defensive coordinator Gus Bradley as well as their offensive coordinator Ken Whisenhunt this week. I was looking to have them provide clarity to some of the challenges they appeared to be experiencing on both sides of the ball thus far in their season.

Understanding that their defense has been hampered by injuries to critical players, I still wanted to know if what lead to the slow starts and big plays they’ve allowed to their opposition. As I listened to Defensive Coordinator Gus Bradley explain some of his perspective on keeping guys fresh and healthy while working some young guys into their game plan. He mentioned in one game “we need to come out of the locker room better” from halftime and in this game (versus the Broncos) it was “the beginning part of the game.” of the guys need to “Everyone doing their responsibility, take care of that, don’t do too much, don’t over-analyze things, don’t guess.”

“I think there always some scheme things, that we look at to position our guys… In the second series (on Sunday) I started to run more pressures to get our guys going.” Coach Gus Bradley continued to say, “I think it’s just getting into a rhythm and as a play-caller, sometimes you want to bring pressure to get the guys going; sometimes with a guy, if they blitz right away early, it gets them into of the flow of the game. So, it’s still learning some of our younger guys and what gets them going.”

With the changes in the tackling rules in the league I wanted to know from a coach with over 10 years’ coaching experience in the NFL, how does he, or has he, changed his coaching style at all to accommodate the new tackling rules, Coach Bradley responded by saying, “Well, it’s changed a lot! It’s something that, even in OTA’s in phase 2, we’re talking about the different styles of tackling. If you’d ask our guys, we have Charger Roll, Strike Zone tackle; they’re 4 or 5 styles that we may incorporate in a game basis.”

Coach Bradley continued to explain, “So, when we tackle about a tackling plan, we go through each individual and say hey, “’ here he is in space, what is your tackling plan?’” Is it going to be Charger Roll, is it going to be Strike Zone Tackle, is it going to be Big Boy Tackle? What type of tackle are you going to have? We show them on tape and hopefully, it processes quick, which plan to use. You start teaching it and you hope that becomes more ingrained with experience.”

Though Keenan Allen and Austin Ekeler are on pace for record-breaking seasons individually, the team has seemingly stumbled in scoring situations as well as experienced issues ingratiating their leading rusher into their game plan last week. Ekeler and Allen are third and fourth respectively in receptions this season. Allen is also one of two players to have caught 8+ passes in each of their first three games of the season since 2016.

After becoming one of five players to record 150+ yards in and at least three touchdowns in the opening week of the season. Austin’s 9 receiving TD’s has moved him to first on the list of undrafted running backs since 1967 and #2 in Chargers’ history.

Even though these guys have been having some success this season, the Chargers have had 4 turnovers in the Red Zone and struggled with welcoming Melvin back on the field last week. I was interested in hearing from Offensive Coordinator Ken Whisenhunt about these challenges.

So, I asked Coach Whisenhunt to elaborate on the difficulties incorporating Gordon into the game plan, Whisenhunt responded by saying, “I don’t think it’s a matter of incorporating him into the game plan. We’re going to do what we feel is best to attack and opponent. We know Mel’s (Melvin Gordon) strengths and we try to do that every week; whether it’s Austin or whether it’s JJ or whoever it is.” He continued to say “He’s such a good player and we want to get him in there because he can help you. I just think that, no matter what we want, no what anybody wants it’s a process of being prepared to go play.”

Because I believe this to be such an interesting dynamic, between getting the team’s leading rusher from the recent years the ball versus the guy who’s filled in admirably and has been on a record-setting pace of his own. I followed with “are you guys schematic decision versus personnel decisions” with their running backs and Coach Whisenhunt clarified things for me by saying, “I don’t want to make a mistake in saying that. A lot of what we do is trying to match up personnel. When you talk about running the football, we’re going to run the same play. Melvin and Austin may run it differently, they may have the same success. If it’s not a specific one, we feel like both of those guys do it well.”

I am looking forward to seeing this transition between Gordon and the newly seasoned Ekeler and how they will be used throughout the remainder of the season. I will also be more mindful of the specific tackling styles the players have been coached up on as well. Please share your thoughts on each of these facets of their game in addition to this week’s matchup against the Steelers. Additionally, do not forget to share your predictions for the Steelers vs Chargers by commenting in the comment section of this article on www.whatsgoodinsports.com or by following me on Twitter at “Voice of the Fans” for immediate engagement. Additionally, subscribe to our weekly “Voice of the Fans Podcast” which is available for you on Apple and Google Podcasts including Spotify, TunedIn, and iHeart Radio. As always, we certainly appreciate you for making our voice your choice!