The Department of Education seems to be making it easier for for-profit colleges and servicers to take advantage of students,” said Debbie Goldstein, CRL Executive Vice President. “We need a Department of Education that holds for-profit institutions accountable for abusive practices and a CFPB with a division that protects borrowers from predatory student loan servicers 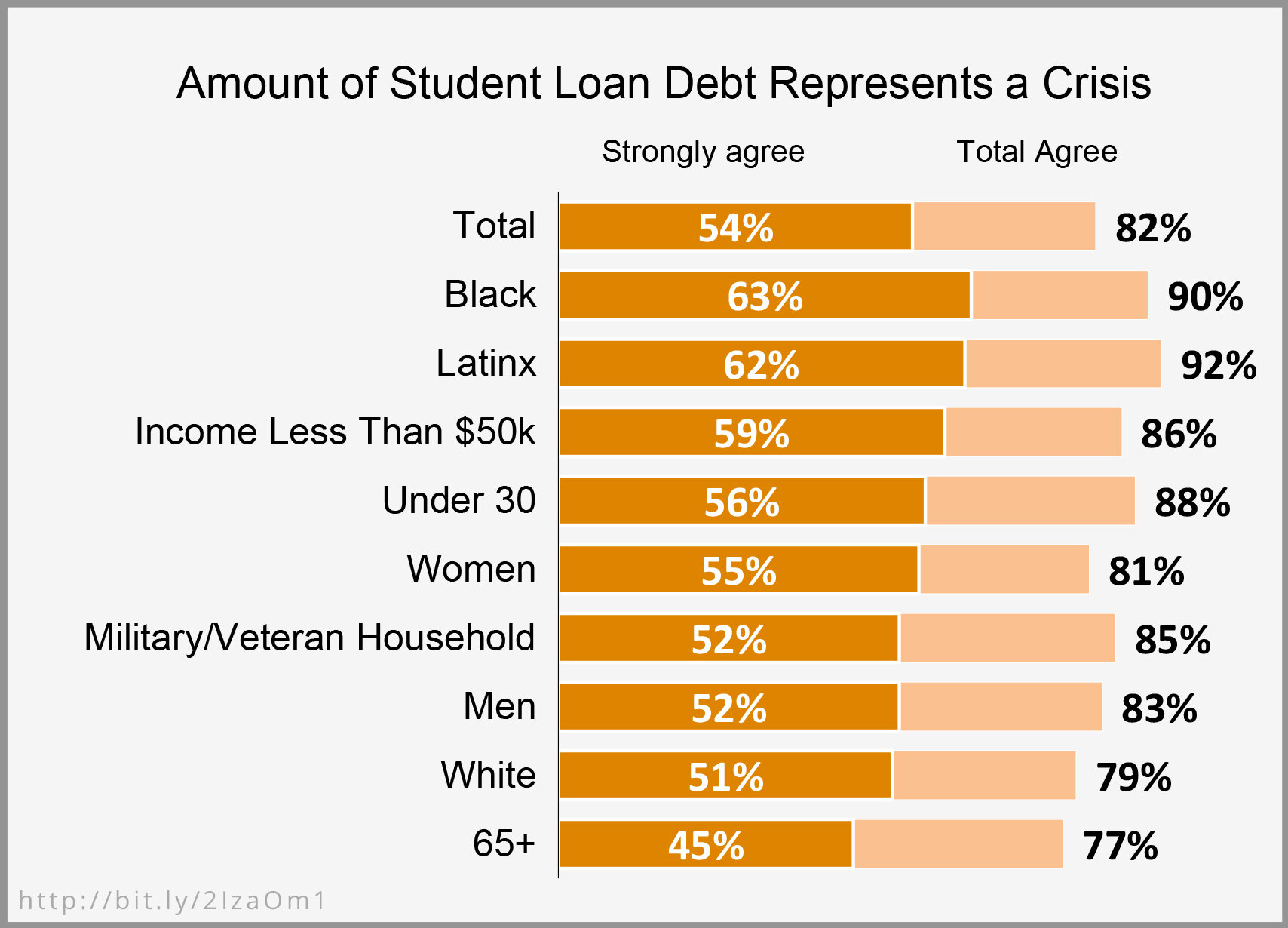 When likely voters across the country were recently asked their opinions about student loan borrowing, 82% agreed that the still-growing $1.5 trillion debt is a national crisis. Even when partisan affiliations were included, the solid concern for this unsustainable financial burden held strong: 74% of Republicans, 80% of independents, and 90% of Democrats.

When asked further about the Consumer Financial Protection Bureau (CFPB)’s reduced efforts to protect students from abusive student loans and student loan services, those most concerned were Blacks, Latinx (73%), consumers earning less than $50,000 per year (72%). Additionally, voters in early Democratic Primary States agreed at 77%, as did both women and military or veterans’ households that polled 70% each.

Conducted by Lake Research Partners and Chesapeake Beach Consulting, the poll was jointly commissioned by the Americans for Financial Reform (AFR) and Center for Responsible Lending (CRL). Its student loan results, released on October 2, found that recent actions by the Department of Education (DOE) and the CFPB both contributed to consumer concerns.

Higher penalty fees charged to struggling borrowers, making it harder for state and federal law enforcement agencies to pursue wrongdoing by state loan servicers and blocked debt relief for students who were defrauded by for-profit institutions were the top DOE criticisms cited in survey.

“[T]he Department of Education seems to be making it easier for for-profit colleges and servicers to take advantage of students,” said Debbie Goldstein, CRL Executive Vice President. “We need a Department of Education that holds for-profit institutions accountable for abusive practices and a CFPB with a division that protects borrowers from predatory student loan servicers.”

Key findings from that report show that:

• Today, over half of all families with Black heads of household aged 25-40 have student debt.

• Black bachelor’s degree graduates are unable to afford loan repayments at five times the rate of comparable white graduates. These Black grads are also more likely to default than whites who never completed a degree.

• Four years after graduation, nearly half of black graduates owe more on their undergraduate student loans than they did when they received their degree; by contrast, only 17% of white graduates face this same dilemma.

Similarly findings and concerns were found in a September student loan debt report entitled Stalling Dreams by Brandeis University’s Institute on Assets and Social Policy, a part of its Heller School for Social Policy and Management. Among its key findings:

• Twenty years after starting school, the typical Black borrower owed about $17,500 more than their white peers;

• The typical Black student loan holder in their 30’s, has negative total wealth of $10,700 compared to whites who are close to breaking even; and

• About half of all Black borrowers and a third of all Latinx borrowers wind up defaulting on their student loans within 20 years.

With researchers and consumers agreeing that student debt is at crisis levels, the larger question becomes: What – as a nation – are we prepared to do about it? And if so – when?

With 44 million people affected by student loan debt, this trillion- dollar issue should not be ignored but rather vigorously debated as part of the 2020 elections in the interest of our collective futures.

“We need a racial equity filter for solutions to reverse the consequences of our current privatized high education financing regime,” states Brandeis’ Stalling Dreams. “We need a return to strong public investment in higher education that acknowledges the societal benefit on an educated public.”

In other words, if you’re drowning in student debt, your education is working against you – instead of for you. It’s time for a new paradigm in American education.

Charlene Crowell is the Center for Responsible Lending’s Communications Deputy Director. She can be reached at Charlene.crowell@responsiblelending.org.