According to the California Education Code, all California school districts will have to submit a first interim budget report by December 15.

Inglewood Unified School District: The Canary in the Coal Mine 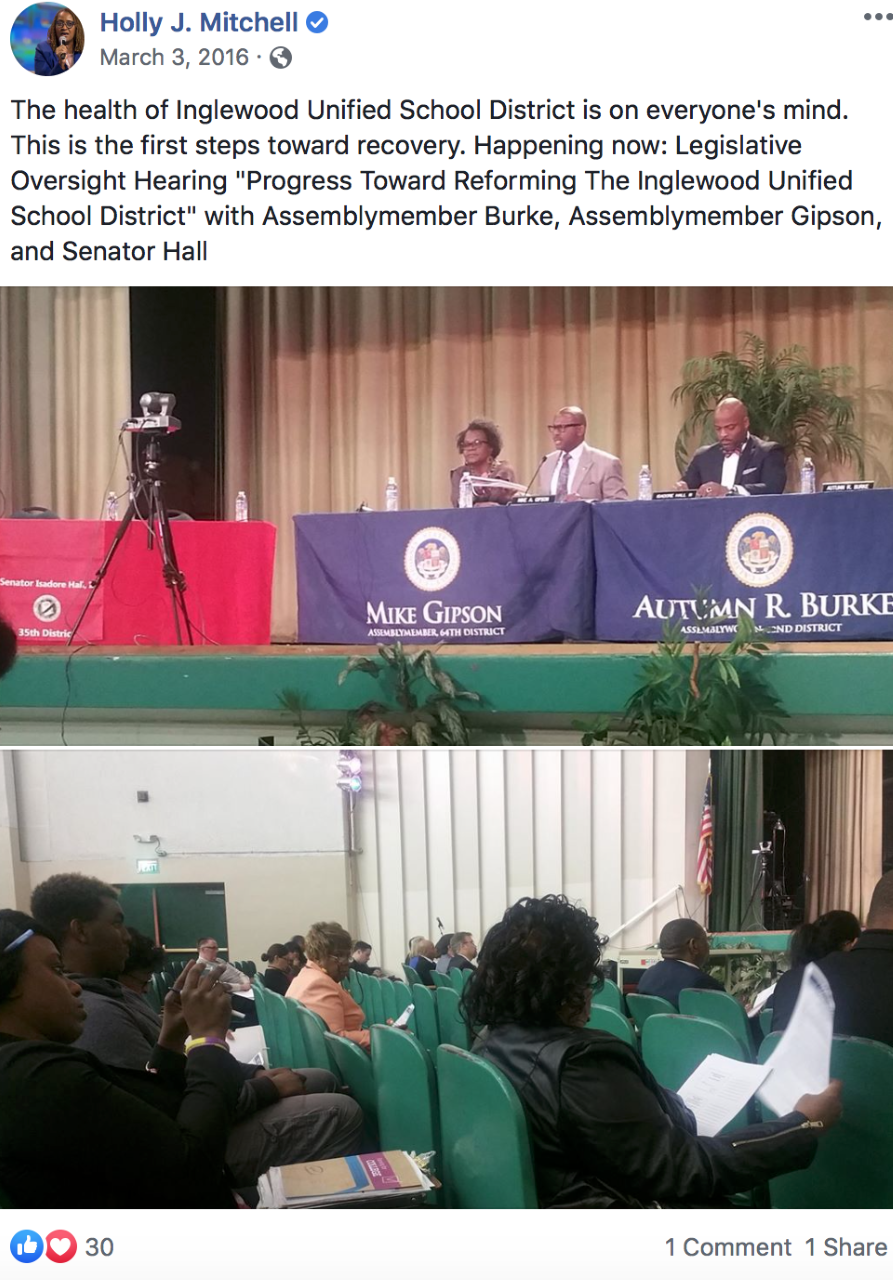 According to the California Education Code, all California school districts will have to submit a first interim budget report by December 15.

This report compares the school district’s ongoing fiscal condition to what was projected in the budget they submitted in July. The report includes the latest student enrollment and attendance figures, data on staffing, year-to-date accounting, and projections of expenditures and cash flow.

Through this review, districts assess whether they will be able to meet their obligations and are required to self-certify whether their fiscal condition is positive, qualified, or negative (i.e., will meet, may not meet, or will not be solvent over the next three years).

Most schools districts will certify that they will meet their financial obligations for the current and two subsequent fiscal years, but there are a growing number of districts that will assign themselves qualified or negative certifications.

Large school districts, based on their July budgets, that may be on the list of qualified and negative include Los Angeles Unified, Sacramento City Unified, Sweetwater Union, and Oakland Unified.

Districts with negative and qualified certifications must come to terms with the fact that unless they find new revenue sources or better control their expenditures they will have to request a state loan to avoid fiscal insolvency.

According to Assembly Bill 1200, called the Eastin Act, the state of California is required to maintain the financial soundness of public school districts. Since 1991, when the bill passed, nine districts have been given emergency loans. Four are still repaying loans they accepted.

Under AB 1200, a district secures a state loan through Legislative action. A state-appointed administrator takes over, the superintendent is fired, and the board of education becomes an advisory body. All decisions about the district’s operational priorities are taken away from the local level until the state loan is paid in full.

State intervention has not been a guarantee that the school district in receivership will be better managed. This has to concern school districts facing this prospect.

Inglewood Unified is currently the only school district in state receivership. Its experience is “the canary in the coal mine” that districts on the verge of accepting a state loan need to look at closely.

In September 2012, the governor approved Senate Bill (SB) 533 authorizing an up-to $55 million loan to Inglewood Unified to allow it to avoid fiscal insolvency. The State Superintendent and California Department of Education (CDE) took over Inglewood’s schools and drew down $29 million from the loan, obligating the school district to pay $1.8 Million a year for 30 years to retire the loan.

Between 2012 and 2017, the state superintendent appointed three administrators, two interim administrators and one trustee. During this period of unstable leadership, the district’s finances and operations did not significantly improve and little progress was made toward being able to return to local control.

In 2015, the Joint Legislative Audit Committee approved an audit concerning the State Superintendent of Public Instruction’s oversight of the Inglewood Unified School District.

A key recommendation the State Auditor made to the Legislature was “any future state emergency funding for a school district appropriated by the Legislature should specifically require the state superintendent to document the selection and appointment process of a state administrator, including the rationales for progressing certain candidates once screened or reasons that particular individuals were ultimately selected to serve as state administrator.”

So far, the Legislature has failed to implement the recommendation put forth by the audit. It’s clear that Inglewood’s progress has suffered because of a lack of stable leadership provided by the State.

A similar experience happening to any other school district in the future is unacceptable.

In 2018, Assembly Bill (AB) 1840 provided financial relief to Inglewood Unified and Oakland Unified as both school districts struggled to balance their budgets and pay off state loans. In that legislation, responsibility for managing a school district under state receivership was removed from CDE and given the responsible County Office of Education.

All that is known about how this appointment was made is that the Fiscal Crisis Management and Assistance Team (FCMAT pronounced Fick-mat) identified 26 candidates to be interviewed, a LACOE interview panel made a recommendation and it was approved by County Superintendent Debra Durado, State Superintendent of Public Instruction Tony Thurmond and President of the Board of Education Linda Darling-Hammond.

Before her appointment, Torres was acting interim County Administrator and, for about a year, she was the LACOE Deputy Superintendent charged with working with Melendez. So she takes the job already knowing what needs to be prioritized and what resources she will need to succeed in turning around the school district.

This may be the model that should be adopted for future state takeovers. Instead of firing the superintendent of the school district, a reasonable transition period should be observed. Prior to the appointment of Torres, each state administrator had to figure out on their own how they would lead. That process failed to produce satisfactory progress.

It is time for the Legislature – hopefully, during the upcoming session – to craft legislation that will provide better direction on how school districts under state receivership are managed. The future of the students in those districts will be the beneficiaries of the legislation they approve.