My Friend, My Hero, is celebrating its 25th Anniversary with a commemorative edition that includes an addendum of book discussion questions and now available; a full curriculum with a companion Student Success Guidebook, Teacher’s Guide, and Unit Assessments containing lesson plans. The goal is to promote Social and Emotional Learning (SEL) in the classroom by providing strategies for students to make better choices and gaining much needed confidence to support unleashing their inner greatness.

Jerald LeVon Hoover became the published author of a Young Adult (YA) title, one of a few books targeted toward young Black and Brown boys ages 12 and up, My Friend, My Hero. This novella has become a staple, as recommended reading in elementary through high schools across the country and around the world. That is a distinct honor Hoover shares with a short list of African-American male YA authors including: Walter Dean Myers, Kevin Powell, Kwame Alexander, and Ralph Burgess.

My Friend, My Hero, is celebrating its 25th Anniversary with a commemorative edition that includes an addendum of book discussion questions and now available; a full curriculum with a companion Student Success Guidebook, Teacher’s Guide, and Unit Assessments containing lesson plans. The goal is to promote Social and Emotional Learning (SEL) in the classroom by providing strategies for students to make better choices and gain much needed confidence to support unleashing their inner greatness. 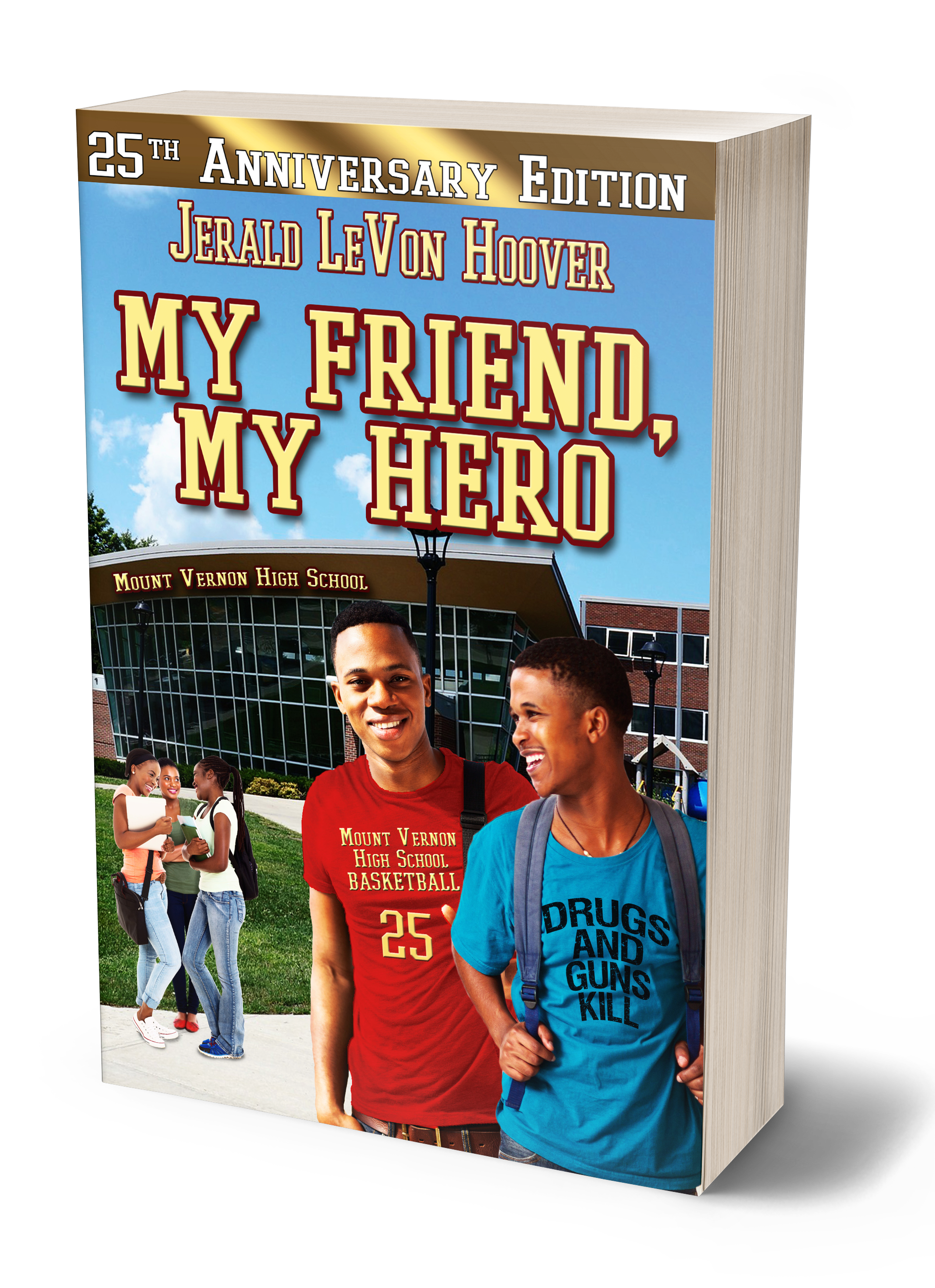 Hoover states, “Exposing Black and Brown children to a barrage of negative imagery and expecting their positive self-image to remain intact is ridiculous, insensitive, unjust, and unfair.”

Hoover then adds, “Young Black and Brown men are focused, gifted, driven, intelligent, and masterful at a host of other talents besides rap music and competitive sports; of which carries no shame, but we have other skill sets of significant influence. We are men of honor and integrity, regardless of whether we are born into poverty or wealth. But how can young Black and Brown men, or men of any race for that matter, define themselves and live up to their full potential if they only receive distorted representations?”

Hoover continues, “My Friend, My Hero is intended for all youth (races and genders), but I gave the spotlight to young, Black and Brown males because of the dire need for young Black and Brown men to have access to more positive representations of themselves to which they can relate.”

Celebrating 25 Years in Print, My Friend, My Hero, is the first in the acclaimed The Hero Book Series by Jerald LeVon Hoover. Other titles from The Hero Book Series are He Was My Hero, Too, A Hopeful Hero, and Hoop Hero. The novella took nine years to get published after forty rejections and sixty drafts.

Bennett Wilson has the world at his fingertips as one of the top basketball players in New York State who is destined to lead Mount Vernon High School to the state championship for the first time. Many of the nation’s top colleges are already reaching out, eager to sign him to their roster. Scholarships are guaranteed. Still young, Bennett is used to fanfare and eagerly anticipating his rise to fame and fortune. Yet, all is not as it appears.

Strife and difficulties plague Bennett’s personal life. Growing up in Mount Vernon, he is the son of a single mother and the oldest of three, sharing a tiny apartment in the tough inner-city projects. Life is a struggle. Bennett knows his ticket to freedom is through basketball and academic excellence. Thanks to the support of his loyal friend Kirby and a budding romance with Tara, he pursues his dreams and refuses to get caught up in the fast life of the streets.

Things change when Bennett learns his mother’s health is failing. She has fallen far behind on the rent, and they face eviction. The weight of responsibility falls on Bennett’s shoulders, just as trouble and the troublemakers appear. Fast money seems to be the only option. Will Bennett try to help his family and risk ruining his future? Will Bennett finally succumb to the dangers and temporary comfort of the street life he has fought so hard to avoid? And if he give in, what will it cost him?

Purchase the book on Amazon or learn more at https://theherobookseries.com

Jerald LeVon Hoover released his debut YA title My Friend, My Hero in 1992. A year later, he was awarded Best New Male Writer of the Year by the Literary Society in Virginia for this novella. He was also listed among bestselling Black authors, from 1994 – 1996 in various African-American publications. In 1995, Hoover was awarded the WritersCorp Award by President Bill Clinton. In 1998, Jerald was inducted into the Mount Vernon Boy’s and Girl’s Club Hall of Fame.

This is the same Boy’s and Girl’s Club in which Denzel Washington grew up and to which Denzel regularly supports. Jerald went on to become a career sportswriter who has covered the New York Knicks and the New Jersey/Brooklyn Nets for the Black Athlete Sports Network, The Network Journal, Sportstyle New York, Pure Sports New York, and BustaSports.com.

In 2007, Basketball Hall of Fame and New York Post writer Peter Vecsey featured Jerald Hoover in a Sunday spread, recognizing him for his first documentary, Four Square Miles to Glory.